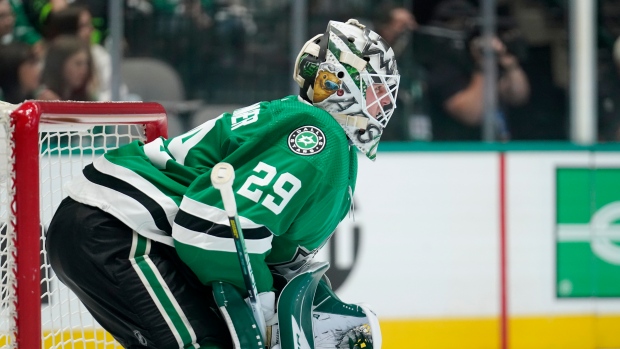 The 23-year-old entered the season fourth on the organization’s goalie depth chart, behind Ben Bishop, Braden Holtby, and Anton Khudobin. Now Oettinger is front and centre in the Stanley Cup playoffs, having stopped 93 of 96 shots, including one shutout, as the Stars have taken a 2-1 series lead over the Calgary Flames.

Through three games against the Flames, Oettinger looks unflappable. His .969 save percentage is first among all playoff goalies, and his 1.01 goals-against average is third.

“It’s a dream come true to be a starting goalie here in the playoffs and I’m just going to keep trying to give my team a chance to win,” he said after Game 1.

Much of Oettinger’s success this spring can be attributed to his pedigree and work ethic.

The 23-year-old was drafted 26th overall in 2017 out of Boston University and, according to teammate Tyler Seguin, entered an ideal situation in Dallas - precisely because of the netminders he usurped. During the regular season, he was 30-15-1, with a .914 save percentage and 2.53 goals-against average.

“He’s still a sponge around the rink,” Seguin said. “Being with guys over the last little while like Anton [Khudobin] and seeing [Braden] Holtby’s work ethic and getting advice from [Ben Bishop] on the grand scheme of things, he’s come into that perfect environment, and it’s just been dependent on how he took it all in and handled it. He’s done a great job and that’s why when these big moments have come, he’s rose to the occasion for us.”

Bishop, who retired this season right before Christmas because of injury, has been an invaluable mentor for the young Oettinger, often sharing scouting reports on shooters he has faced and offering whatever guidance the Lakeville, Minn., native needs.

“I talk to him every day in practice and just, if I’m seeing something, tell him,” Bishop said. “He’s a great kid. That makes it that much better. He’s always trying to learn and is not afraid to ask questions and is easy to talk to. You try to keep him upbeat, talk to the players. If I see something, try to give him advice.”

Stars head coach Rick Bowness has emphasized the need to communicate more directly with Oettinger and players of his generation, and texts him after every start.

“Before he gets off the bus, I always send him a text just to keep the communication open and keep boosting him up,” he said, while crediting Stars goalie coach Jeff Reese for Oettinger’s development into a bona fide No. 1 goalie.

“After a game, when he plays and we’re on the bus, I’ll always send him a text. Just, ‘Great job kid,’ just boosting him up and keeping him focused…he wants to know that we believe in him, and we do. Clearly, we do…especially with this generation, you’ve got to communicate, so we try to do as much as we can.”

Bowness’ appreciation for Oettinger has grown as the series has evolved.

“Elite athletes—it’s not just their physical attributes you admire,” he said after Game 3.

“It’s their mental skills, which is just as important. Jake has that inner strength, that belief in himself. He has tremendous poise, and that’s what an elite athlete has. [Andrei Vasilevskiy], when I had him coming in, it took him a year and a half, two years to take off. With Jake, he was forced into a tough situation this year and it didn’t bother him, and now we’re throwing him in there in the playoffs, not bothering him. Elite athletes have that innate ability to believe in themselves and rise to the occasion at the right time.”

Bishop has a similar view to his former head coach. He believes Oettinger has the mental makeup to succeed – and that his playoff performance in 2022 is likely a sign of things to come in his National Hockey League career.