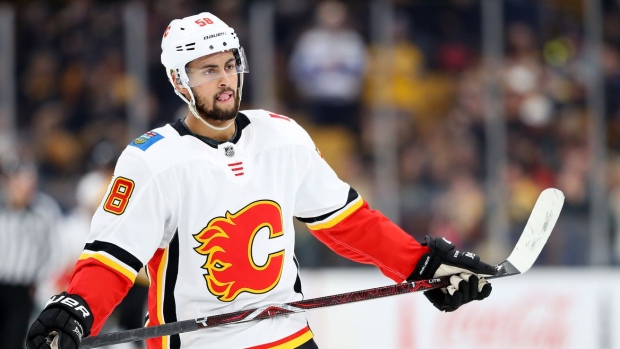 After a 2020-2021 campaign where he played in just eight of 56 games, Calgary Flames defenceman Oliver Kylington decided to alter his approach to the mental side of the sport.

Kylington, a second-round pick in 2015 and once a highly touted prospect, was a perpetual healthy scratch during the tumultuous year for the Flames and at one point was placed on waivers. Over the summer, while his physical training remained the same (he was one of the team’s top performers in the training camp fitness tests), he concentrated more on consistency and living in the present.

“Being more mentally prepared and experienced with a couple of more years of experience and knowing what to do on a daily basis has definitely helped,” he said. “It’s a challenge I’ve given myself, to be more consistent and take it game by game and reset after every game. You’re only as good as your last game. I think the mental aspect of everything has been a key with me.”

Kylington has been one of the league’s biggest surprises early this season. Through 14 contests, he has 10 points – already a career high and fifth on the team. All 10 points have come at even strength, tied for first among all NHL blueliners.

He and veteran Chris Tanev have formed an effective second pair, regularly going against other teams’ best forwards. According to Natural Stat Trick, among the 191 blueliners who have played at least 100 five-on-five minutes, Kylington is 10th in Corsi percentage (57.00). Kylington’s ice time has risen from 13 minutes a night last year to 16:32 this season.

“We’re both enjoying our time out there together,” Tanev said ahead of Tuesday’s tilt in Philadelphia. “[Kylington]’s a tremendous skater…he can make a lot of plays that a lot of guys in the league can’t make.”

In the past, the Flames have been criticized for getting too high when times are good and too low when facing adversity. Kylington's focus has been on not riding the rollercoaster of emotions that come with an 82-game season, instead maintaining an even-keel outlook.

“You can’t look to forwards or backwards, you just have to stay in the present and be dialled in,” he said. “We play so many games…if you have an off-night, you have to reset right away.”

Kylington had to reset after coughing up the puck against the Toronto Maple Leafs in the third period on Friday evening, a giveaway that led to the tying goal as Calgary lost in overtime.

“I’m pissed off right now,” he said afterward. Kylington had scored the Flame’s lone goal of the game after jumping into the play and deking out Leafs goalie Jack Campbell, but it didn’t matter. “I don’t care if I score or get points, I just want to win games and we didn’t do that today.”

While goalie Jacob Markstrom has referenced last year’s struggles as a motivating factor for his own hot start, Kylington has mostly moved on. He did, however, admit to thinking about whether he would ever get another opportunity with the team that drafted him.

“Myself, confidence has never been out of the picture, but obviously you start to think in different ways,” he said. “When the opportunity didn’t happen, I just tried to stay in the present and make the best of it.”

That self-belief, according to teammates, has never been a problem for Kylington.

“I know, that he’s always had a lot of confidence, but it’s a matter of getting the opportunity and he’s been taking care of his opportunity,” said Rasmus Andersson, also selected by the Flames in the second round in 2015.

Across the pond in Sweden, Johnny Oduya – Kylington’s mentor and a long-time NHL blueliner who won the Stanley Cup with Chicago in 2010 – doesn’t seem surprised about his protégé’s early success this season.

Kylington met Oduya as a child when he was just starting out in the sport. They train together in the off-season, and this summer visited Kenya to donate hockey equipment and play with the Kenya Lions.

“The drive in him is something I’ve seen for a long time,” Oduya said.

Over the summer, Oduya and Kylington talked about how things went last season in Calgary. Oduya’s advice to Kylington, and all young blueliners he helps: It’s up to you to change the situation.

“They have to find their own way, and that’s only done by learning,” Oduya said. “In the NHL, a lot of things can happen quite quickly and all of a sudden they’re in that position where they can perform and then they perform and take that next step.”

Kylington is taking Oduya’s words to heart as he continues to cement himself as a top-four blueliner on the Flames and author one of the NHL’s biggest feel-good stories of the season.

“I didn’t play last year, so I couldn’t show what I could do,” Kylington said. “If I play, I can show. Simple as that…I’m the same person, same guy, and try to stay humble and perform.”