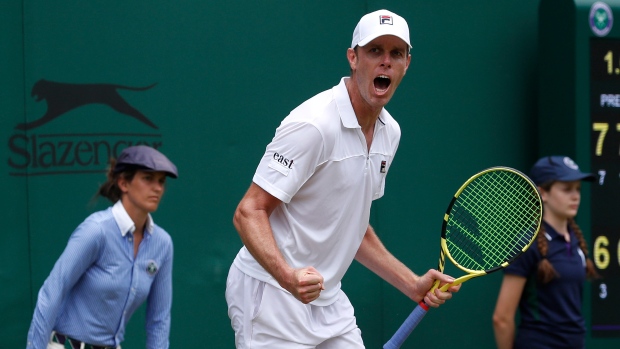 WIMBLEDON, England — When Sam Querrey and Tennys Sandgren play Monday on Court 12 at Wimbledon, it will be the first meeting between two American men in the fourth round or later at the All England Club in 19 years.

It's also the first such matchup at any Grand Slam tournament since 2007.

"At least there will be one in the quarters, for sure, which is cool. I like that. I like the fact that there will be one guy pushing forward and looking to make an even farther run," Sandgren said. "If there's one that makes a run, that means we don't have to hear the 'They're all gone by the second round' stuff."

Sandgren, ranked 94th, advanced Saturday by eliminating No. 12 seed Fabio Fognini 6-3, 7-6 (12), 6-3 in a match marked by Fognini's outburst, in Italian, in which he said the All England Club deserved to be hit by a bomb.

"Felt great to kind of sneak by in those tiebreakers," Querrey said.

The last time two men from the U.S. played in Week 2 at Wimbledon was 2000, when Pete Sampras beat Jan-Michael Gambill in the quarterfinals. Andy Roddick defeated Mardy Fish in the 2007 Australian Open quarterfinals.

Even though Querrey, who is from California, was a semifinalist at Wimbledon in 2017, and a quarterfinalist the year before — eliminating the defending champion en route each time — he was not expecting much of a run now.

He hadn't won a Grand Slam match in 2019 until this week and was sidelined for a chunk of time with an abdominal injury.

Sandgren, who is from Tennessee, didn't exactly love his own chances, either. He came into Wimbledon on a nine-match losing skid in tour-level action.

No one, he said Saturday, should have expected much from him.

"You wouldn't have been smart if you'd done that," said Sandgren, whose best showing at a major was getting to the 2017 Australian Open quarterfinals. "Let's say that would have been a bad call."

He and Querrey have never played against each other on tour, although they have practiced together.

As for how much scouting Sandgren has done during Week 1, he said with a laugh: "I haven't watched much, but when I do watch, he hits an ace."

Turns out Coco Gauff will not win every match she ever plays at Wimbledon. Yes, she's still unbeaten in singles heading into Monday's fourth round, but the 15-year-old American and her partner, Jay Clarke of Britain, lost in the first round of mixed doubles.

Gauff and Clark were defeated 6-1, 6-4 by Robert Lindstedt and Jelena Ostapenko.

She looked on the bright side, though.

"I was able to hit a couple of good serves. Got my serve back on track. Practiced some returns against the big-guy serve," Gauff said. "I think it will help me in the match on Monday."

And what a match it is: The 313th-ranked teen, who never had played in a Grand Slam's main draw before, taking on No. 7 seed Simona Halep, a former No. 1 who won the French Open last year.

There was a bit of debate before Serena Williams and Andy Murray made their debut as a mixed doubles pairing Saturday on Centre Court: Who would play which side? And who would be in charge?

After all, they make quite a team — Williams owns 23 Grand Slam titles in singles, 14 in women's doubles and two in mixed doubles, while Murray has three major singles championships and two Olympic singles gold medals.

Williams left zero doubts with regard to the first question, saying: "I always play the forehand side. If you want to play with me, I play forehand. It's just the only rule I have."

And so it was during their 6-4, 6-1 first-round victory over Alexa Guarachi and Andreas Mies.

As for who made the duo's decisions?

And Murray's: "We were saying before the match, we're both the younger sibling, so we're used to being bossed by our older brother and sister. So we're sort of taking turns, I guess."