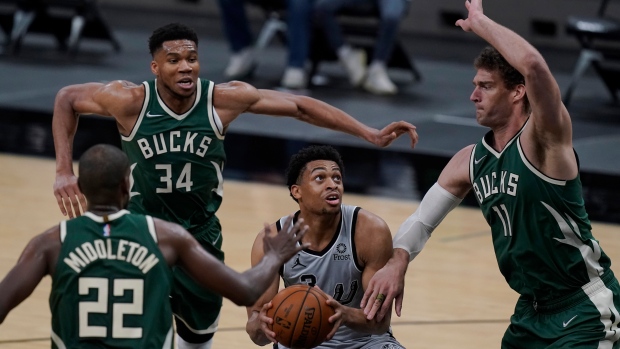 SAN ANTONIO — The San Antonio Spurs used the agony of their most humiliating defeat this season as motivation for an uplifting victory, and it couldn’t have come at a better time.

DeMar DeRozan had 23 points and the Spurs set a franchise record for points in the first half while rolling to a 146-125 victory over the Milwaukee Bucks on Monday night.

Milwaukee had a five-game winning streak snapped and dropped a game behind idle Brooklyn for second place in the Eastern Conference.

“I wouldn’t say (that loss to Boston) came up by name,” San Antonio guard Lonnie Walker IV said, “but as far as teammates and players looking at each other and knowing there is a whole another 24 minutes, we just knew what time it was.”

The Spurs' magic number to clinch a berth in the play-in tournament dropped to one with their victory and New Orleans’ 115-110 loss at Memphis.

“It was a good night against a hell of a team, a championship-calibre team, well-coached,” San Antonio coach Gregg Popovich said. “We have to be just thrilled with it, but not too satisfied. We are still in a big battle.”

San Antonio set a season high for points and a team best with 87 points in the first half, the second-most the club has scored in any half. The Spurs tied their mark for any half with 12 3-pointers in the first and finished 17 for 29 from long range.

Dejounte Murray added 21 points, Keldon Johnson and Patty Mills each had 20 and Rudy Gay scored 19 for San Antonio. Mills and Gay combined to shoot 9 for 15 on 3s.

San Antonio had lost six of seven entering Monday but got off to an historic start against Milwaukee.

The Spurs scored a season-high 45 points in the first quarter, the fourth-largest total in franchise history, and followed it with the most points in team history during the first half.

“We’ve got to find a way to get stops,” Bucks coach Mike Budenholzer said. “Just be better overall defensively, be more efficient. It’s in us. We’ve just got to kind of go out and execute it on both ends.”

The Spurs shot 67% from the field and on 3-pointers in the first half.

Popovich expressed his best wishes to NBA referee Tony Brown, who will miss the rest of the regular season and post-season as he undergoes treatment after being diagnosed with pancreatic cancer last month.

Brown has officiated 1,109 regular-season games and 35 playoff games in 19 seasons.

“He’s a really class act,” Popovich said. “You feel for somebody and for their family when something like this occurs. We just wish him the best and hope the people (caring for him) figure something out.”

Bucks: San Antonio honoured former Spurs guard Bryn Forbes with a video tribute prior to the game. Before signing with the Bucks last off-season, Forbes played four seasons for the Spurs after going undrafted in 2016 out of Michigan State. … Antetokounmpo had a career-high 15 assists in the Bucks’ 120-113 victory over the Spurs on March 20. He had four assists Monday.

Spurs: San Antonio’s highest-scoring first quarter and previous high for the first half both came against Denver. The Spurs scored 47 points in the opening quarter against the Nuggets in 1993 and had 84 points in the first half against the Nuggets in 1984. San Antonio’s most prolific half also came against Denver, when the Spurs scored 91 points in the second half in 1984. … Devin Vassell has 50 3-pointers this season, joining Gary Neal, Davis Bertans, Tony Parker, Lloyd Daniels, Beno Udrih and Manu Ginobili as the only rookies in franchise history to reach that mark.

Spurs: At the Brooklyn Nets on Wednesday.