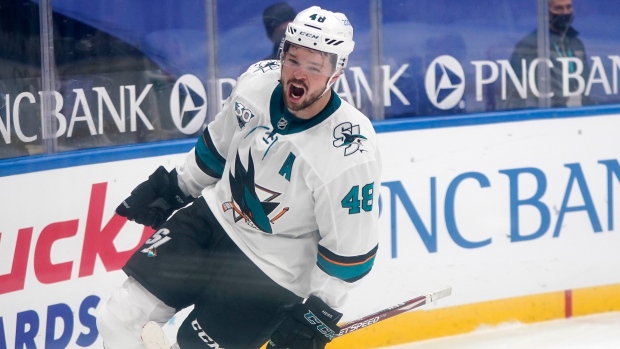 Both players are pending unrestricted free agents, and while the Sharks would have liked to have extended Hertl already, LeBrun reports the 27-year-old has yet to start talks. Hertl, who carries a $5.625 million cap hit, scored 19 goals, and posted 43 points 50 games with the Sharks last season.

"Tomas Hertl would be a big name and it’s pretty rare for a centre of that calibre to move in season," LeBrun said on Insider Trading. "What’s going on is that he’s entering the final year of his contract where he’ll be an unrestricted free agent on July 13th. The Sharks would have loved to have extended him this past summer, but my sense was Hertl just wasn’t ready to enter that type of conversation. So where does this go? If the Sharks are out of a playoff spot come March 21st trade deadline and Hertl doesn’t have a change of heart, I think that’s a guy that could be in play. A lot of teams are keeping an eye on that."

Kessel, who's entering his third season with the Coyotes, posted 20 goals and 43 points in 56 games last season. A two-time Stanley Cup champion with the Pittsburgh Penguins, Kessel has 30 or more goals in a season six times in his career.

The 34-year-old winger carries a $6.8 million cap hit as he enters the final season of an eight-year, $64 million deal signed with the Toronto Maple Leafs in 2013.

"I think we can be firm that Phil Kessel’s name will be on that Trade Bait Board. Kessel is in the final year of his contract, and we know that Bill Armstrong and the Coyotes have defined the direction that they’re going in and that will not include Kessel," Dreger said. "He wants a fresh start, and he wants to earn a new contract somewhere in the National Hockey League. He’s got some no-trade protection and he wants to go to a competitive, if not a contending, team. He’s got the big cap hit, but the salary is only one million dollars. So, if you have an injury or a team that is struggling offensively, he could be a fit later in the season."

The NHL's trade deadline is set for March 21, just under one month after the Olympic break ends.