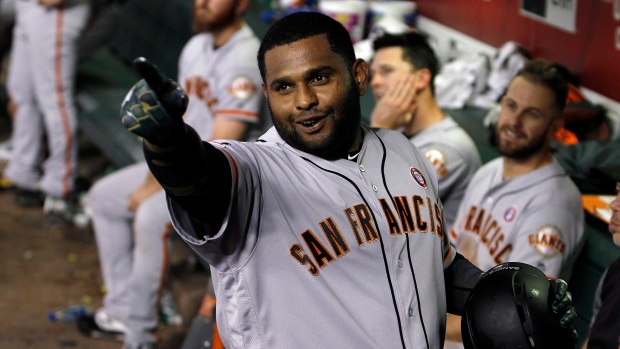 PHOENIX — His pitching line didn't completely indicate it, but Madison Bumgarner couldn't have felt better on the mound Saturday night. It helped that his San Francisco Giants teammates provided plenty of run support.

Bumgarner allowed four runs and five hits with six strikeouts in 6 1/3 innings in the Giants' 8-5 win over the Arizona Diamondbacks.

"This is as good as I've felt. I'm throwing the ball as good as I ever have," said Bumgarner (3-4). "And the results not being there to match up is frustrating, but when our offence is putting up eight (runs), then it's easier to deal with.

"But it's about winning, and that's it."

Pablo Sandoval and Brandon Belt hit solo home runs for the Giants. Sandoval pinch-hit in the eighth inning with two outs and drove a 2-2 pitch from Matt Andriese over the right-field fence for his second career pinch-homer.

Belt's home run, also off Andriese, splashed down in the pool beyond right field in the top of the ninth with two outs.

"How about that?" Giants manager Bruce Bochy said of Sandoval. "It's nice to start him, but when he doesn't start, it's nice to have him come off the bench, too. When you look at our offence, he's the silver lining through our struggles, I think."

Zack Godley (1-4) has allowed four or more earned runs in five of his eight starts this season and hasn't made it beyond four innings in each of the last four. That included Saturday, when the Giants reached four runs off Godley in the third inning.

"We put some really good swings on some balls when he did make a mistake," Duggar said of Godley. "We just kind of kept the lineup going and we just kind of fed off each other."

After Godley walked Bumgarner with one out in the fourth and heard boos from the crowd, manager Torey Lovullo removed him. Godley lasted 3 1/3 innings, allowing four runs and six hits with three strikeouts.

For his part, Godley was encouraged with his outing.

"I felt awesome. The biggest thing was being able to put people away," he said. "I felt like I was back to where I needed to be. I was back to throwing the ball where I wanted with intent."

Escobar's home run led off the fourth, and the Diamondbacks made it 4-2 when Jones singled in Blake Swihart from second base with two outs.

The Diamondbacks cut the lead to 6-4 and had runners at the corners in the seventh, but couldn't add more in that inning.

The Diamondbacks commemorated the 15th anniversary of Hall of Famer Randy Johnson's perfect game against Atlanta. Fans received a Johnson figurine, and "The Big Unit" threw out the ceremonial first pitch.

Diamondbacks right-hander Taijuan Walker isn't going to throw for at least six weeks after injuring his shoulder during a rehab start earlier in the week.

Walker received a platelet-rich plasma injection in his shoulder, which will delay his return from major elbow surgery that was on track for midway through this season. He made only three starts in 2018.

"I don't want to push through it and make it worse," Walker said. "I don't think it's bad enough for surgery. It's just swelling."

Both teams got highlight-reel defensive plays from their respective third basemen. Evan Longoria took a hit away from Ketel Marte to end the fifth, and Escobar snagged Kevin Pillar's hard line drive on the fly in the sixth.

Giants: RHP Johnny Cueto threw a bullpen session off flat ground before Saturday's game, and the Giants were encouraged enough by what they saw for Bochy to say that Cueto could come back from Tommy John surgery before the season ends. Cueto had elbow reconstructive surgery last August.

Diamondbacks: RHP Zack Greinke is on track to make his next scheduled start, Tuesday at San Diego, on five days' rest, after a bullpen session that Lovullo said went well Saturday. Greinke had an MRI on Friday that revealed no damage to his abdominal area after he left his last start with a trainer. ... OF David Peralta was held out of the lineup after aggravating pain in his upper back and shoulder area Friday night.

Giants: Bochy said LHP Drew Pomeranz is set to come off the injured list and start Sunday's series finale against Arizona. Pomeranz (1-4) went on the 10-day injured list on May 9.