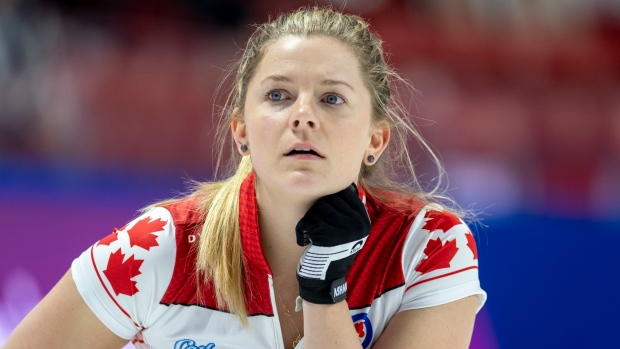 Rachel Homan and her rink out of the Ottawa Curling Club have set their foursome for the run to the 2022 Olympics.

A spot opened on Homan's Ontario squad after they shockingly cut ties with longtime lead Lisa Weagle over the weekend. Emma Miskew will remain at third while Joanne Courtney will move from the second to lead position after the addition of Wilkes.

"We’re thrilled to announce the addition of Sarah Wilkes to Team Homan. The Toronto-born curler, four-time Scottie’s participant and 2019 champion was part of our 2017 GSOC Champions Cup win," the team said on Twitter. "She is a terrific curler and we’re thrilled to have someone with her pedigree and drive join our team at second stones. Please help us welcome Sarah Wilkes back to the strong Ontario curling family!"

We’re thrilled to announce the addition of Sarah Wilkes to Team Homan. The Toronto-born curler, 4-time Scottie’s participant and 2019 champion was part of our 2017 GSOC Champions Cup win. She is a terrific curler and we’re thrilled... 1/2 pic.twitter.com/DWemEeB1Zx

Wilkes, who was born in Toronto but lives in Alberta, helped Team Carey win last year's Scotties Tournament of Hearts after beating Team Homan in a dramatic final. Wilkes has played with Team Homan before, winning the 2017 Champions Cup on the Grand Slam circuit as a spare for Courtney.

Despite Homan, Wilkes and Courtney all living in Alberta, they can still represent Ontario due to the new birthright status rule (Homan, Miskew and Wilkes were all born in Ontario).

Homan, who already has three Scotties titles and a world championship to her name at the age of 30, represented Canada at the 2018 Olympics and is looking to get back after missing the podium as well as the playoffs in South Korea.