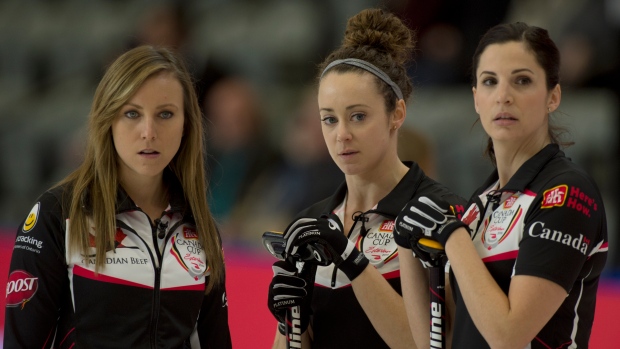 Team Homan's decision to part ways with Lisa Weagle dramatically changed the look of one of the country's top rinks and put the all-star lead at the top of curling's free agent list.

Weagle was shocked to receive word that the team would no longer need her services. She said she was informed when skip Rachel Homan and vice-skip Emma Miskew called her on Thursday afternoon.

"I wasn't part of the discussions and it was a decision that was taken by the team," Weagle told The Canadian Press on Friday from Ottawa.

The development was a stunner given that Weagle has had another strong season and is considered one of the best leads in the world.

Over her 11-year run with the Ottawa-based side, the team won three Scotties Tournament of Hearts titles, one world championship and represented Canada at the 2018 Winter Olympics.

The team statement said the change came with "mixed emotions," adding the players value their friendship with Weagle and wished her the best. Homan, in an email late Friday afternoon, expanded on the decision.

"Lisa is one of the best leads in the game and we wouldn't have had the success we achieved over the last few years without her," Homan said. "The game is constantly changing and we need to change with it by restructuring if we want to keep up with the best teams in the world. Personnel changes play an important role in high performance for teams to be able to grow and thrive.

"If you’re always standing still you are getting passed. Giving the comparison to other high-performance sports, trading elite talented athletes is commonplace and curling is no different."

There was no immediate word on Weagle's replacement.

The team announcement, somewhat buried in the sports news cycle given the seismic developments on the coronavirus pandemic front, came on the same day the women's world championship in Prince George, B.C., was cancelled.

The rest of this season's schedule on the World Curling Tour is in doubt. The remaining Grand Slam events were cancelled on Friday.

Teams and players aren't wasting time making moves as they look to the second half of the quadrennial.

Team Robyn Silvernagle will have a new-look foursome with only the skip and second Jessie Hunkin returning. And Team Chelsea Carey announced Friday that vice-skip Sarah Wilkes would be departing.

"It happens, it's curling," Carey said from Calgary. "I don't know that we necessarily saw it coming but I don't think you can be that surprised about anything to be honest.

"It's just one of those times in the sport where that kind of stuff does happen."

Team Homan won its first Scotties title in 2013, added national crowns in '14 and '17 and won the Olympic Trials on home ice.

"I think all of these accomplishments are really the result of being on a team with great teammates," Weagle said. "So I'm very proud of what we built together. We've come a long way and grown so much.

"I'm very grateful to them for having me as part of the team. I was able to achieve way beyond whatever I thought was possible."

The team did not reach the podium at the 2018 Pyeongchang Games. Homan returned to the Scotties final last year but lost to Carey in an extra end.

Weagle, who was named a first-team all-star at the 2020 Scotties, is known for using a high-difficulty tick shot that is risky but very effective if done consistently.

"What I love about it is it's an important team shot," Weagle said. "The sweeping, the line calling, the throw, it's all really important and I think it brings an extra degree of skill to the lead position."

Her signature shot is a big reason why chances are good she'll be snapped up by another competitive team. The 34-year-old is still in her prime and few leads can match her experience.

She said she's most proud of what Team Homan was able to build on the ice and the friendships along the way.

"I love the game, I love playing in big games, I love testing myself in competition," Weagle said. "But mostly I love being part of a team."

Weagle will not be playing any other tour events this season with the Homan rink.

"Rachel was the one who called me to join the team 11 years ago so I think it's fitting that she was the one to call me to tell me that they were going in a different direction," Weagle said. "I'm great friends with the girls. I was a bridesmaid in Emma's wedding.

"I think we're going to stay friends but certainly the nature of our relationship will change now."

This was Team Homan's first full-time lineup change since second Joanne Courtney replaced Alison Kreviazuk in 2014. The team slipped a bit in the rankings this season, the first campaign since Homan and Courtney became mothers last year.

Homan is currently ranked fourth in Canada and eighth in the world. The team is hoping to get back to the Winter Olympics in 2022 in Beijing.

"We are not the first team to have gone through this difficult process and we won't be the last," Homan said. "It's difficult because in other sports these decisions are made by coaches and general managers to prioritize the success of the team. Unfortunately in curling it's not like that.

"Players have to wear multiple hats as the GM, as teammates, and friends. The challenge in making this team decision is not lost on any of us and it is an emotional time on a personal level."

Weagle plans to spend the coming days replying to the dozens of messages she received while pondering her next move.

"I've been taking some time just to process this as it's pretty new and evaluate my options," she said. "But I know that I love the game and I want to be involved with it in some capacity. I'd be interested in playing for the right women's team or potentially in coaching for Canada or internationally.

"Right now I'm open to all options at this point and I'm starting to look towards the future."

This report by The Canadian Press was first published March 13, 2020.