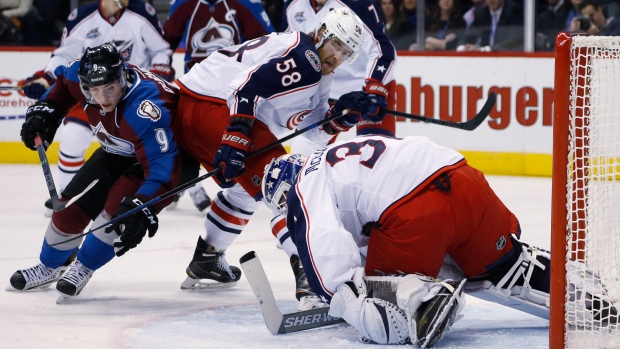 DENVER - David Savard shook off an early mistake and produced the game-winning goal.

Savard drove in a shot from just inside the blue line with 1:01 left in the third period, lifting the Columbus Blue Jackets past the Colorado Avalanche 4-3 on Sunday night.

The long-distance shot gave the Blue Jackets their fifth win in their last six road games and more than offset Savard's early turnover that led to a goal for Colorado.

"It wasn't my best game and I was just trying to keep being positive," Savard said. "It paid off in the end. It felt good."

Savard was able to get enough on the puck to knuckle it past Semyon Varlamov after it partially deflected off the body of the Avalanche's Borna Rendulic.

"I think it's just bad luck. Bad luck," Varlamov said. "And their first goal was tipped in front of the net. That makes for a tough night."

Brandon Dubinsky scored a pair of goals for the Blue Jackets, and Ryan Johansen and added a goal.

Colorado scored its quickest goal of the season when Jarome Iginla intercepted a wayward clearing pass by Savard in the Blue Jackets' zone and wristed a shot past Curtis McElhinney 30 seconds into the game.

"That's hockey. It happens," Johansen said. "We put that behind us as soon as it happened. We did a good job of responding."

Gabriel Landeskog and Cody McLeod also had goals for Colorado, but just missed closing their three-game homestand with another win.

"We fought back to get the tying goal and thought at worst we would get the game into overtime," Iginla said. "These are the ones that hurt, for sure."

Landeskog put in a backhand shot for Colorado to even the score at 2, but Johansen put the Blue Jackets back in front about 2 1/2 minutes later and extended his points scoring streak to seven games with his 12th goal of the season.

Colorado re-tied the game at 3 at 15:30 of the second when McLeod put in a wraparound shot, his third goal of the season.

Columbus answered Colorado's quick first strike with Dubinsky's first two goals of the season. He re-directed Cody Goloubef's shot into the net at 11:35 of the first and gave Columbus a 2-1 lead with his second goal, a wrist shot from the left circle that went into the net over Varlamov's glove.