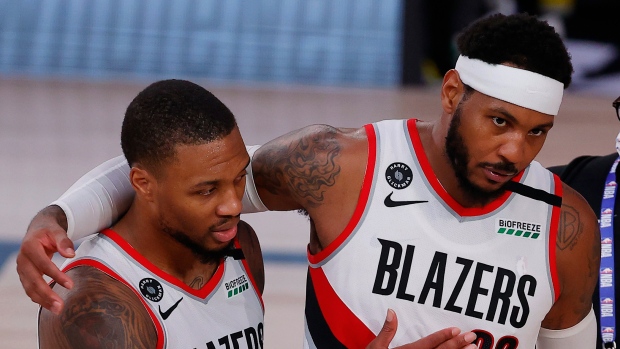 The Memphis Grizzlies occupied the eighth and final Western Conference playoff spot coming into the NBA bubble at the end of July. But the Phoenix Suns, Portland Trail Blazers and San Antonio Spurs were all within striking distance.

The Grizzlies dropped their first game in overtime and things snowballed from there. In seven restart games, Memphis has gone just 1-6 while the other three teams have taken off.

Portland got 61 points from Damian Lillard Tuesday night as they clawed out a much-needed victory to move to 5-2 in Orlando. Same with the Spurs, who are getting some of the most efficient offence DeMar DeRozan has supplied all season. And then there is the undefeated Suns at 7-0, who are quickly becoming everyone’s favourite underdog.

Because things are so close, the final day of the NBA’s “regular” season isn’t going to be enough to settle it. For the first time in more than 60 years, the NBA will have a play-in to determine the final spot in the playoffs this weekend. The last time this happened was in 1956 between the New York Knicks and the now-defunct Syracuse Nationals, who snatched the victory.

With everything depending on Thursday’s slate of games, here is what has to happen for each of the four teams to make the play-in as either the eight or the nine seed:

Portland will be seeded:

Memphis will be seeded:

Phoenix will be seeded:

San Antonio will be seeded: