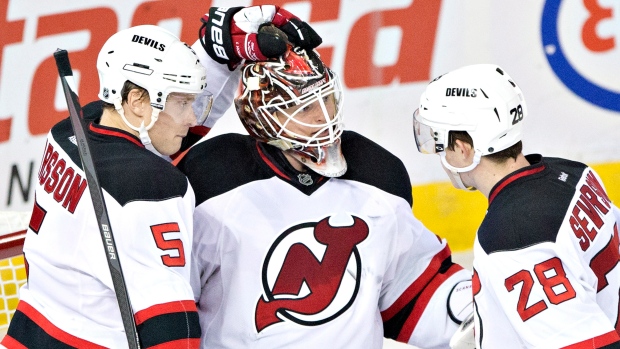 EDMONTON - Cory Schneider may have been making his 20th consecutive appearance in net from the start of the season for the New Jersey Devils, but he didn't look any worse for wear.

Schneider made 29 saves to record his second shutout of the season and 14th of his career as the Devils snapped a two-game losing skid with a 2-0 victory over the Edmonton Oilers on Friday.

"It was a big game," Schneider. "We weren't real happy with our last game and we had lost two in a row and we had to stop that (skid). This is going to be a big road trip for us and to get even so far on the trip is important for us.

"Shutouts are nice, it means you won the game which is important to me. Some nights you need a shutout, they are going to come in a 1-0 or 2-0 game. That's more the mentality I have is do what you need to do to make sure your team has the extra goal."

Adam Henrique and Tuomo Ruutu scored and Eric Gelinas had two assists for the Devils (9-9-2), who won just their third game in their last nine outings.

"We had a good effort tonight across the board," said Devils head coach Peter DeBoer. "I particularly liked our second period. I thought we got through the first period, but I thought our second period we started playing like we really needed to play. We're grinding, we played hard in their end. We didn't give them much and that has to be our game."

"It's not fun to be on losing streaks, that's for sure," said Oilers forward Taylor Hall, whose team has also had a four-game skid this season. "It's a tough way to come to the rink. We just need to find a way.

"We've talked so much, but it has to be at the point where we are sick of it. I'm not questioning the try or the character on our team, we have just got to be better."

"They are a team that sits back and they wait and they wait and it is usually a low-scoring affair," he said. "They wait for you to turn a puck over and they usually shove it right where the sun doesn't shine. That's what they did. We had a costly turnover that they turned into a goal and that was all they needed."

Edmonton forward David Perron said the Oilers own script is getting awfully tired.

"Something has to change," he said. "When you are making those mistakes, something needs to happen. They are the same mistakes we were doing last year. We keep talking about how much better we are this year, but for me it is the same record now that we had last year. It is not better.

"It is pretty frustrating."

Edmonton had a good chance to start the scoring midway through the opening frame, as Benoit Pouliot had Schneider beat with a deke, but Pouliot lost control of the puck before he could put a backhand shot into a wide-open net.

New Jersey's best opportunity in the scoreless first period as the Oilers coughed up a short-handed breakaway to Henrique, but Edmonton starter Viktor Fasth was able to get a piece of the shot to deflect it wide.

New Jersey broke the deadlock just past the midway point of the second period as Henrique got another partial breakaway, shrugging off defender Justin Schultz before putting the puck through Fasth's legs for his fifth of the season.

The Devils took a 2-0 lead with five minutes left in the second period as Ruutu sniped a shot to the top corner from the middle of the left face-off circle that Fasth only waved at.

Things got even tougher for the Oilers in the second period as Pouliot left the game with a broken foot after blocking a shot. The team later announced he will be out indefinitely.

New Jersey outshot the Oilers 19-8 in the second.

Edmonton had an opportunity to get back into the game early in the third when Marek Zidlicky took a double minor for high-sticking Nail Yakupov in the face, but the Oilers were unable to get anything going on the extended man advantage.

Both teams are right back at it again on Saturday as the Oilers finish off a five-game homestand against the Chicago Blackhawks and the Devils travel to Calgary to face the Flames.

Notes: It was the first of two meetings between the two teams this season. The Devils and Oilers split two games last season, each winning on home ice … Oilers forward Ryan Nugent-Hopkins was playing in his 200th career NHL game. His 99 assists coming into the game were the most from players selected in the 2011 Draft … Schneider made his 20th consecutive start, setting a New Jersey record for starts from the beginning of the season. Martin Brodeur started the first 19 games of the 2001-2002 season. Brodeur holds the Devils record for overall consecutive starts with 44, doing so at the end of the 1995-96 season … The Oilers adjusted their top line for the start of the matchup, moving Pouliot up to play with Nugent-Hopkins and Jordan Eberle, while Taylor Hall started the game with Leon Draisaitl and Teddy Purcell … Oilers defenceman Mark Fayne played his first game against his former team after signing with Edmonton as a free agent last summer. Fayne spent his first four seasons with the Devils … Out for the Devils were Ryane Clowe (concussion), Jon Merrill (arm) and Bryce Salvador (lower body). The Oilers had no injuries … New Jersey forward Jaromir Jagr entered the contest with 15 goals and 24 assists for 39 points in 32 career appearances against the Oilers, but was held off the scoresheet on Friday.