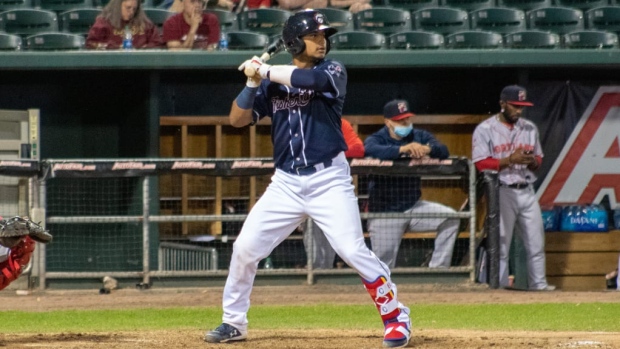 MESA, Ariz. — The Toronto Blue Jays’ recent splurges in free agency have accentuated an exciting, ready-to-win core nicely, but the idea of sustainable winning that the club’s brass has talked about repeatedly will come down to continuing to develop its own young talent in the minor leagues.

Gabriel Moreno is proof that’s still happening, and there’s a chance he’s one of the best of the recent bunch in the end.

While it seems crazy to talk about a catching prospect with three games above the Double-A level alongside the likes of Vladimir Guerrero Jr. and Bo Bichette, Moreno is the latest elite talent to come through the system.

Over the course of the last calendar year, the performance has also been elite.

It started in Venezuelan winter ball when he posted a .980 OPS and walked more than he struck out in 18 games against much older competition, and that continued at Double-A New Hampshire this summer with a monster .373/.441/.651 slash line in 32 games before a broken thumb interrupted things.

Now, Moreno has continued it in the Arizona Fall League for the Mesa Solar Sox, showing off his elite bat-to-ball skills, a developing approach and emerging power.

From Guerrero Jr. to Bichette to Nate Pearson, Moreno is yet another Blue Jays prospect to land within the top 10 or so names in the game.

“I’m not surprised based on the performance, the plate discipline, the contact rates, using the whole field, the numbers of pitches he’s seeing, the excitement around his catching, as well, and hearing positive things about his third-base play. There’s a lot to be excited about.”

At the Fall Stars Game last week, the buzz was palpable.

Surrounded by some of the best prospects in the game, Moreno’s tool kit was what people were talking about.

In that game, Moreno was robbed of a hit on a 108-MPH rocket when he turned around a 99-MPH fastball from Los Angeles Dodgers right-hander Bobby Miller.

Back with the Solar Sox a couple days later, Moreno gunned down a runner at third base with a seed. Then he played at third base the next day, as the versatility experiment to potentially keep his bat in the lineup at the next level continues.

While there’s refinement and polish needed at such a young age — Moreno will turn 22 in February, which makes it all the more amazing that Vladdy Jr. will still be 22 then, as well — no scout in attendance in the AFL questions Moreno’s ability behind the plate.

Atkins doesn’t, either, but Moreno will continue to dabble at the hot corner, where a need currently exists at the big-league level.

“I’d rather answer that in a month or two, but the athleticism and the hands and the arm are there,” Atkins said when asked what he expects to see from Moreno at third base in spring training. “It’s very realistic. And then it will be, how much time do we give it relative to catching?

“The upside of him doing it at catcher is too high just to take that away.”

Signed as an amateur shortstop, Moreno isn’t new to the left side of the infield and the Jays’ emphasis on versatility extends to just about every prospect they’ve developed over the last three-to-five years, elite or otherwise.

Panamanian shortstop prospect Leo Jimenez, signed in the 2017 international class, one year after Moreno, has seen the progress over the years — from wispy converted infielder in the Dominican Summer League a few years ago to talk of the Fall League.

“He’s a beast,” Jimenez smiled. “I think that’s the perfect way to describe him — beast. He’s going to be in the big leagues for a long time and he’s going to be a star.

“I used to see him, this skinny guy. But he always raked. Since he signed, he’s been hitting. I kind of grew up with him in the system and to see him at the point where he is right now is amazing.”

The superlatives fly when it comes to prospects like Moreno.

They not only draw the eyes of scouts, but fellow prospects trying to make it in the same way.

“Moreno is The Show,” said first base/left field prospect Spencer Horwitz, a 24th-round pick of the Jays from the 2019 draft. “He’s the best hitter I’ve ever seen. He’s a freak. He’s a special player and will be for a long time.”

Lance Rymel, who manages in the Chicago Cubs system and has been at the helm of the Solar Sox for the past month, hasn’t seen Moreno take many bad at-bats.

“The bat-to-ball skill from him is absolutely incredible and he’s also got a hose behind the plate, which never hurts,” Rymel said.

The message to Moreno this year has been about improving swing decisions. As long as he’s swinging at the right pitches, the hit tool will carry him to production.

“I see video from two or three years ago and I literally was swinging at everything, so I’ve worked hard to swing at better pitches and improve my approach,” Moreno said through a translator.

While Moreno only appeared in two games at third base for Rymel, the reps behind the scenes have been the important part.

“He’s a gifted athlete, so [it's about] just working on his ground-ball routine,” Rymel said. “He’s going to be alright there.”

The only disappointment of Moreno’s 2021 calendar year is the fractured thumb that cost him two months.

Had that not happened, who knows where he’d be. Even though it’s extremely unlikely he would have been summoned to the majors, sometimes prospects knock down the door on their own, especially with the Jays making a playoff push down the stretch.

“At firs,t it was really hard,” Moreno said of the missed time. “It took me a couple months for me to bounce back. And then when I was able to come back, first game I got hit with a ball and had a concussion and that took a little bit.”

Moreno eventually finished his minor league season with three games in Triple-A, which is where he’ll begin 2022.

The Jays assistant director of player development, Joe Sclafani, beamed this week as he watched Moreno put the finishing touches on his AFL season, which wraps up with Saturday’s championship game.

Could Moreno have impressed more over the past month?

“It’s hard to argue that he could’ve, honestly,” Sclafani said. “The biggest priority was getting him healthy and just making sure he was ready for this. With that missed time, it seemed like the perfect opportunity to give him a step up in competition and we really just wanted him to get reps. We told him, ‘Even if you go out there and don’t perform, it’s okay. We’re still working on the strength of the hand and want to make sure you’re good there and make up for those missed reps,’ and he’s pretty much come down here and been the talk of the Fall League and it’s not surprising on our end. He’s really put himself in the position to vault himself into the discussion next year.”

With the MLB off-season just underway, it will be interesting to watch how the Jays' front office goes about stacking their catcher depth chart heading into spring training.

Danny Jansen, Alejandro Kirk and Reese McGuire all finished the season seeing playing time, and all had their moments in 2021.

They all have value, as well, giving Atkins a trade chip or two in his back pocket, especially with relatively little available on the free-agent market.

But Moreno isn’t far off, and it’s pretty easy to project a June or July arrival once that extra year of control is gained (a new CBA, hopefully, could erase that song and dance entirely).

There’s no doubt Moreno could use a half-season in Triple-A to work on his game-calling with more advanced arms and all the other details that come along with the gruelling position.

Moreno is expected to once again play some winter ball in Venezuela, which will add even more high-level experience to his resume as he heads into big-league camp in Dunedin next February.

The message to Moreno as he heads into what will be a short off-season for him is to continue to refine his approach and figure out which pitches he can do damage with.

“Make pitchers come to you because he’s no secret anymore,” Sclafani said.