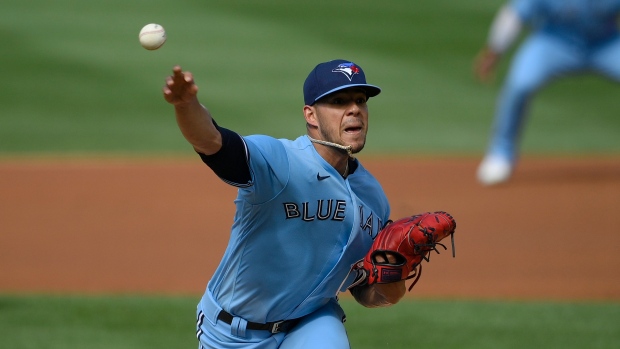 SCOTTSDALE, Ariz. — A potential Robbie Ray signing is the one the baseball world was waiting on, but the Jose Berríos extension is the deal the Toronto Blue Jays absolutely needed to get done.

On Tuesday morning, they did just that, handing the 27-year-old right-hander a seven-year extension that will cost them $131 million, a source confirmed.

It was obvious how much the club liked him when they gave up a pair of their top prospects in 2020 fifth-overall pick Austin Martin and right-handed starter Simeon Woods Richardson, the key piece in the Marcus Stroman trade, at the trade deadline in July, and Berríos did not disappoint in his two months in Toronto.

The Puerto Rican righty registered a 3.58 ERA across 12 starts, completing at least six innings in nine of those outings as Berríos continued to show his trademark ability to consistently pitch deep into games.

Berríos even stepped things up down the stretch as the Jays were playing scorching-hot baseball as a team, allowing just 32 hits across his final 46 innings with a 2.93 ERA that was fully supported by a 2.87 FIP mark.

The fact he was scheduled to become a free agent at the end of the 2022 campaign provided some angst from the minute the trade was made, but that’s all in the rear-view mirror now and Berríos will be near the top of the Jays’ rotation for a long time.

The seven-year pact will take him through the 2028 campaign, but there’s reportedly an opt-out after the 2026 season that Berríos can exercise if he wishes, as well as limited no-trade protection.

The opt-out is a very attractive part of this deal for the Berríos camp, allowing him to potentially hit free agency and another payday again heading into his age-33 season.

Getting Berríos’ extension done gives the Jays some certainty early in the winter and avoids the stress of having a key piece unsigned and just months away from free agency heading into the season.

It also locks in the trio of Berríos, Alek Manoah, who isn’t scheduled to hit free agency until 2028, and veteran lefty Hyun Jin Ryu, who’s entering the third year of the four-year, $80-million deal he signed in the winter of 2019.

Nate Pearson could also factor into that mix if he can find a way to stay healthy in order to sharpen up the command enough to be a rotation option.

Where the chase of Ray goes from here will be compelling.

It was always 50/50 at best that the Jays would be willing to match the many nine-figure offers Ray is expected to get, and they currently seem to be more interested in replicating the buy-low, short-term deal that worked out so well with the lefty in 2021 with someone else.

Don’t completely rule out a Ray return, but it’s clear the priority was Berríos, given the prospect capital investment and the track record.

The Jays could seek even more long-term certainty with their key pieces this winter, as deals for Vladimir Guerrero Jr. and Bo Bichette are definitely something the front office has been thinking about for a while now and it wouldn’t be surprising to see one of them get done before spring training ends next March if either of those two young stars are interested.