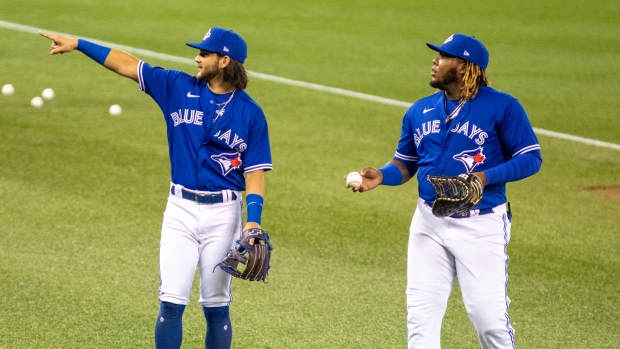 TORONTO — Each off-season is more important than the last as the Toronto Blue Jays attempt to build a World Series contender around its young core.

Even in the midst of a pandemic, that endeavour is no different over the next three months, as the Jays and club president Mark Shapiro attempt to build on a 32-28 record and a playoff appearance.

While rebuilds are far from linear and things can go sideways in a flash in the sport of baseball, it’s clear the Jays are on the right track.

It’s also very clear there’s still a large chasm between the Jays and the league’s upper echelon, with much work to be done on improving the roster in the weeks and months ahead.

They took a big step forward in 2020. Ideally without some of the challenges away from the field, they’ll take another in 2021.

From the uncertainty of desperately trying to find a home ballpark to the adversity of settling for paint-splashed Triple-A digs in Buffalo, it was a summer filled with logistical nightmares and off-the-field disappointments for the club, but it did not affect what a young group of Jays were able to do on the field.

“The recurrent theme for me was our players’ belief in each other and in their talent and in a timeframe that was probably faster than any of us thought was possible, and certainly faster than most outside experts thought was possible,” Shapiro said ahead of MLB free agency officially opening next week. “And then seeing that belief transfer and transition into the reality of a successful season and taking the next step towards a championship future. That’s kind of what resonates with me.

“Going from a 95-loss team (in 2019) to a team that played meaningful games up until the end and ultimately had a chance to play — even in an altered format — in a postseason environment, that’s invaluable experience for them and great next steps in our plan.”

From the front office down to the coaching staff, not many changes are expected ahead of 2021.

From AL manager of the year candidate Charlie Montoyo, who has another year left on his deal, plus a club option for 2022, on down, the entire coaching staff has been invited back.

Shapiro, meanwhile, seems confident he’ll be sticking around, as well, even as his original five-year was set to expire this year.

The Blue Jays’ club policy is to not publicly divulge contract terms for executives, but Shapiro has given no indication he’s looking elsewhere, and the 53-year-old president and CEO believes everyone at Rogers is on the same page with his leadership and the direction of the franchise.

“I want to be here, both from a personal perspective and, maybe most importantly, I want to finish the job,” Shapiro said. “I want to be part of bringing a world championship back to Toronto and Canada.

“Excited about the progress we’ve made, love who I work with and appreciate who I work for, and the desire to be here long-term has been reciprocated by the people I work for. That’s as simple as I can be for you. I’ll be here until I’m not here, but I would expect, based upon my desire to be here and the reciprocation of that, I would expect that’s going to continue to happen.”

That’s where the Blue Jays are as of today. Here are a handful of questions that will help answer where they’re going between now and spring training next February.

Which Blue Jays are free agents this winter?

The day after the World Series ended the paperwork became official and 147 players became free agents, including seven Blue Jays.

Ken Giles is by far the biggest name, but the veteran closer is out for a year after undergoing Tommy John surgery. He is now viewed as a reclamation project and a candidate for a buy-low two-year deal rather than any sort of priority, given the circumstances.

Ray, Walker, Shoemaker and Bass all seem like candidates to return if the price is right, but the Jays may investigate what other depth pitching options the market holds before committing.

The Jays also have two option decisions to make and both of them are no-brainers.

Right-hander Chase Anderson, 32, has a pricey $9.5 million club option with a $500,000 buyout that won’t be picked up, while reliever Rafael Dolis’ $1.5 million salary will be. He’ll reside once again at the back end of Montoyo’s bullpen in 2021.

When will free agent action start picking up and what are the key dates?

Unlike the NHL, NBA and NFL, when MLB free agency opens, the first few weeks are always a slow burn.

That won’t change in the coming weeks thanks to all the uncertainty surrounding the pandemic and what things will look like six months from now.

A handful of free agents will always seek clarity early on once the five-day quiet period ends (Nov. 1) and the deadline to accept or reject qualifying offers passes (Nov. 11).

As always, teams will have to do their 40-man roster housecleaning ahead of the deadline to protect players from the Rule 5 draft on Nov. 20, while the non-tender deadline is slated for Dec. 2.

Veteran infielder Travis Shaw, who slashed .239/.306/.411 with six homers in 50 games in his first season with the Jays, is one of three arbitration-eligible players — Teoscar Hernandez and Ross Stripling are the others — and the most likely to be non-tendered at a projected salary of $5.4 million, per MLB Trade Rumors.

What are the priorities to improve?

The answer to this one is easy, and it’s been stated by both Shapiro and GM Ross Atkins this month: pitching and defence.

The rotation is in clear need of help with just Hyun-Jin Ryu, Tanner Roark and Ross Stripling as veteran rotation options under contract.

Nate Pearson will also be earmarked for a rotation spot, but another top-of-the-rotation arm has to be a priority.

Going about improving the glovework will be a jigsaw puzzle and where those pieces end up will have everything to do with reciprocated free-agent interest and potential trades.

Some of the versatility possessed by players like Cavan Biggio and even Bo Bichette — second base, anyone? — gives Atkins options.

“I think one of the positives about the needs for improvement is they’re so obvious — defence and strike throwing, to me,” Shapiro said. “I look at what we accomplished in light of significant challenges defensively and with our strike throwing and think, ‘Hey, if Ross and our baseball operations group go out and can just get better in those two areas and just take natural progress forward,’ … that it will be a significant positive for us in continuing to improve next year.”

Do the Blue Jays have money to spend?

Shapiro and Atkins have both said they’re optimistic their hands won’t be tied by ownership this winter.

After going out and making a big splash with the Ryu signing last December, it would make zero sense for the Jays to pull back the spending reigns and settle for building an 85-win ballclub, expanded postseason or not.

But the pandemic, obviously, creates a whole lot of uncertainty as Shapiro and the front office puts together a 2021 payroll proposal to take to ownership over the next couple of weeks.

Currently going through meetings with the coaching staff, research and development analysts and scouts in order to get an organization-wide grasp on the priorities, a budget recommendation plan will then be presented to Rogers ownership sometime before mid-November, according to Shapiro.

The 2020 opening-day payroll — prior to the pandemic changing things, of course — checked in at about $100 million, give or take.

“The reality of the pandemic clearly changes the dynamic of our revenues,” Shapiro said. “However, there has been consistent support from our ownership, consistent encouragement that we continue to progress in our plan, that we continue to move forward. That was evident with Ryu, that was evident at the trade deadline. In a very truncated season, very odd with zero revenue, we still added players and [salary] at the trade deadline this year and every indication has been very strongly that they expect us to continue to pursue where we need to add to our core and continue to pursue players this offseason.

“I think the resources are going to be there if we think the right deals are there.”

Are the Vancouver Canadians no longer a Blue Jays’ affiliate?

Lost amidst a pandemic, touchy labour negotiations and a wild, 60-game season was the inevitable restructuring of the minor leagues.

As details of the contraction that would see each team move to four full-season affiliates and a beefed-up instructional league taking the place of short-season clubs leaked this summer, it became obvious the Jays’ Northwest League affiliate could be affected.

But Shapiro shot down a recent report that had the Canadians becoming an Oakland A’s affiliate, calling the report “not factual” and saying nothing is set in stone.

“Major League Baseball has been overwhelmed with the amount of variables it had to deal with this year and the timing on a minor-league plan for next year, although we’ve gotten some loose kind of insight, we haven’t gotten a firm answer on what that’s going to look like,” Shapiro said. “I think an understanding that it’s going to be a reduced number of teams and short-season baseball certainly is not going to be the same.

“What our choices are, where they’re between has not been presented to us yet.”

Will they be able to play in Toronto next season?

As well all know by now, this question can’t be answered this far in advance.

The virus over the next five months will determine that, but Shapiro and the Jays will be spending time and energy on possible contingency plans this winter.

At this point, he’s optimistic Rogers Centre will be in play.

“If you look at next season in totality, I would say based upon the information that we all have that the public health picture is likely to improve to the point that I would think the border would be open at some point during next baseball season, and that would alleviate a lot of the issues,” Shapiro said.

“While I’m hopeful and the majority of our energy and effort will be spent on Toronto, we will clearly also have to look at other places as well, which we will do.”