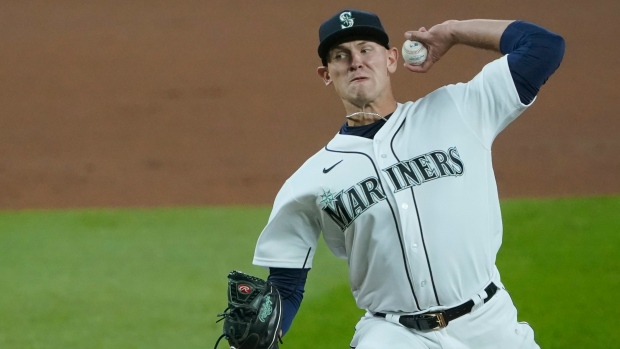 SEATTLE — In what was supposed to be a rebuilding season the Seattle Mariners will go into the final weekend with an outside shot at the post-season.

It's a very slim chance. But for a young team, it's a valuable learning opportunity.

“We’re still playing for something. We still have a little bit of a chance and we know that,” Seattle's Ty France said. “We're coming out with some fire and just running with it right now.”

Nick Margevicius tossed six shutout innings, France drove in a pair of runs and the Mariners kept their slim post-season hopes alive with a 3-2 win over the Houston Astros on Wednesday.

But it’s not just Seattle still nipping at the Astros. The Los Angeles Angels won again on Wednesday and are 2 1/2 games behind the Astros.

It was Seattle’s first series win against Houston since Sept. 17-19, 2018, when the Mariners took two of three. The Mariners last series win over the Astros in Seattle was back in April 2016.

“Getting a chance to be around them, and manage them and see it come together, it’s really fun,” Seattle manager Scott Servais said. “It's fun to be around. They have a good time, they stay loose. But when the game starts its all business.”

Houston’s Zack Greinke didn’t make it through the fifth inning and lost to Seattle for just the second time in nine career starts. Greinke (3-3) struggled with control early and France’s RBI double in the first inning gave Seattle an early lead.

The Mariners got to Greinke for two more runs in the fifth inning. Kyle Seager’s two-out double scored J.P. Crawford from first base despite a perfect relay throw to the plate by shortstop Carlos Correa. France followed with a single into left field to score Seager.

“The last three starts for sure, his command has been a little off. He’s missing on the outside of the plate where he’s usually hits it, throwing some balls in the dirt that he doesn’t usually do and they’re not missing balls,” Astros manager Dusty Baker said. “We know and he knows and the whole world knows he’s better than that.”

Houston got a pair of runs in the ninth off Seattle's Yoshihisa Hirano. Kyle Tucker walked leading off, Aledmys Diaz doubled with two outs and pinch-hitter Josh Reddick singled to drive in both.

George Springer followed with a broken-bat single to advance pinch-runner Myles Straw to second, but Hirano struck out Jose Altuve to end it for his fourth save.

“We need to do a better job offensively. We need to get better,” Astros star Alex Bregman said. “It’s getting down to the end of the season and we need to start swinging the bats a lot better.”

Margevicius (2-3) was clean through four innings, giving up just one hit and walking two batters. He ran into trouble in the fifth inning after singles by Yuli Gurriel and Correa, and a one-out walk to Martin Maldonado to load the bases.

Margevicius got Springer to chase an 0-2 pitch out of the zone for the second out, and Altuve flied out to end the threat.

“Definitley not my best stuff tonight but I thought my curveball was pretty good and that carried me through just keeping them honest with that pitch,” Margevicius said.

The Seattle chapter of the Baseball Writers Association of America handed out its season awards to Mariners players on Wednesday. Kyle Lewis was named player of the year. Marco Gonzales was voted pitcher of the year. And Dee Strange-Gordon was honoured with the “Good Guy Award” for his contributions off the field and with the media.

Mariners: Seattle placed OF Jake Fraley on the injured list and recalled Braden Bishop. Fraley suffered a right quadriceps strain during Tuesday’s game. It was Fraley’s first game after being recalled to take the roster spot of Dylan Moore, who was placed on the concussion injured list.

Mariners: LHP Yusei Kikuchi (2-4, 5.93) gets the start as Seattle opens its final series of the regular season at Oakland. Kikuchi lasted just four innings and allowed five runs in his last start vs. San Diego.