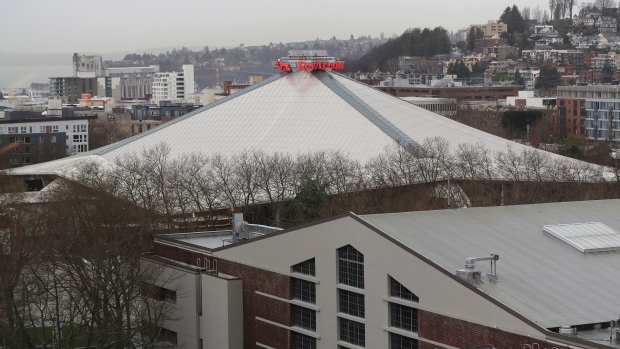 KeyArena in Seattle , The Canadian Press

SEATTLE — The arena for Seattle's expansion NHL team is behind schedule by a couple of months but is still expected to open in plenty of time for the team to begin play in the 2021-22 NHL season.

Team President Tod Leiweke said there have been a few issues related to the COVID-19 pandemic that has led to the timeline being adjusted. The initial hope was for the building to be completed in June 2021. Lewieke said the expectation now is that the venue will be complete later in the summer.

“Any delay is absolutely minimal. Given what we went through the workers have kept building. But there have been issues with supply lines," Leiweke told the AP on Tuesday. "If it’s not going to be the date we hoped it’s not very long thereafter. And it’s impressive how they’ve actually kept things on schedule. If our target was early summer of 2021 to say we’re going to hit it sometime in the summer is pretty good considering all things.”

The delay should not impact Seattle's ability to play in its building during its first season. Unknown is if it'll cause Seattle's hopes of hosting the expansion and NHL draft in the summer of 2021. Leiweke wouldn't rule out still holding the events with the uncertainty of what the NHL calendar will look like for the 2020-21 season.

But a delay may force the WNBA's Seattle Storm into a temporary venue for at least part of the 2021 season. The Storm are the other primary tenant in the building, and played the 2019 and were scheduled to play this season in other venues around the Seattle area.

“The most important thing for us is making sure they have a brilliant home. And that’s really what we’re creating,” Leiweke said. “So how it works, how they can load their schedule, the exact date ... we talk to them all the time.”

The venue — estimated at more than $900 million — is being constructed on the Seattle Center campus on the site of the former KeyArena that was the primary home of the Seattle SuperSonics.

Leiweke also said his staff continues to work on the nickname for the franchise. It was originally expected early this year, but has faced delays working through the trademark process, along with the coronavirus outbreak. Leiweke said now is “not the right time,” for the name.