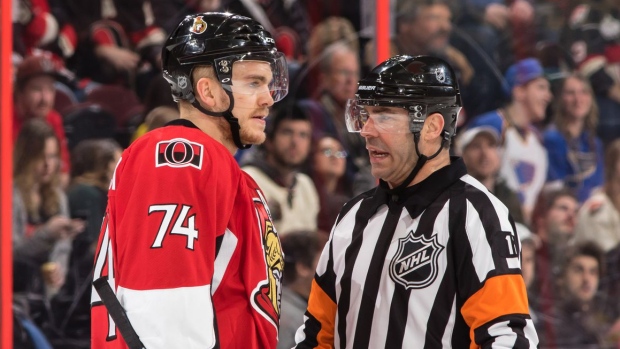 For the second time in two weeks, Ottawa Senators defenceman Mark Borowiecki has been suspended.

The NHL Department of Player Safety announced on Monday a three-game suspension for the 29-year-old rearguard following an illegal hit to the head of Vegas Golden Knights forward Cody Eakin on Sunday.

It was Borowiecki’s first game back in the lineup after a one-game suspension for an elbow to the head of Boston Bruins rookie defenceman Urho Vaakanainen.

The play in question came during the first period of the Sens’ 4-3 overtime loss. A five-minute penalty was assessed on the play and Golden Knights defenceman Jon Merrill engaged Borowiecki in a fight immediately afterwards.

Under the CBA, Borowiecki is considered a repeat offender. He was also suspended for two games in December of 2016 for boarding on Los Angeles Kings forward Tyler Toffoli.

In nine games this season, Borowiecki is a minus-4 in average of 15:38 of ice-time a night.