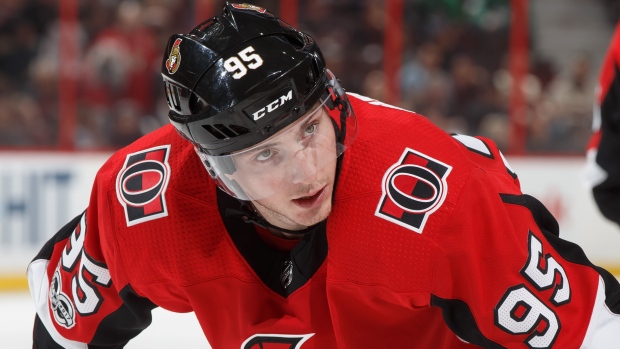 Ottawa Senators veteran forward Zack Smith was placed on waivers Tuesday and his teammate Matt Duchene is not happy about it.

“I’ll be honest, it’s a kick in the balls for us," the forward told reporters regarding the somewhat surprising decision.

Head coach Guy Boucher said that if Smith clears waivers he will remain in the same spot in the lineup heading into the regular season.

"It’s a tough day for the players," said Boucher.

Matt Duchene on Zack Smith being placed on waivers “I’ll be honest, it’s a kick in the balls for us."

Boucher says “it’s a tough day for the the players"
Boucher says if Smith clears waivers he will use it in the same spot he had him. Smith centred Stone and Tkachuk yesterday.

Smith is a 10-year NHL veteran and scored five goals and added 14 assists over 68 games in the nation's capital last season.

According to TSN Hockey Insider Darren Dreger, the Senators tried to trade Smith last season but would have been forced to take a contract back in return due to his cap hit.

Smith has spent his entire career with the Senators after the team selected him in the third round of the 2008 NHL Entry Draft.

Duchene is entering his first full season with the Sens after they acquired him via a trade with the Colorado Avalanche early last season.

Duchene is entering the final season of a five-year, $30 million contract and will become an unrestricted free agent on July 1 if not signed to a new deal.