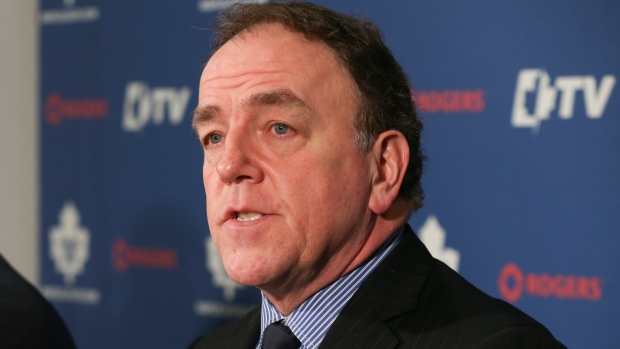 OTTAWA — Tom Anselmi couldn't resist the chance to put his mark on another Canadian NHL franchise.

The Ottawa Senators made a significant change to their front office Wednesday, hiring Anselmi as chief executive officer and president. He replaces Cyril Leeder, who had held the position of president since 2009.

Anselmi most recently worked for Maple Leaf Sports & Entertainment where he held a number of titles during his 17-year tenure with the organization including chief operating officer, executive vice-president and president. The 60-year-old resigned from MLSE in 2013.

Anselmi's bio says he is well known for his arena and real estate projects and is credited with helping deliver Toronto's Air Canada Centre on time and on budget.

Anselmi was first approached with an offer from Ottawa in mid-December. An avid hockey fan, he felt the opportunity to create something from the ground up with a new organization was appealing.

"The opportunity was too interesting to pass up," he said.

Melnyk said the decision to go in a new direction was made last April following the Senators winning the bid for the downtown LeBreton Flats development project, which will include a new arena.

"The fact is it is a massive, massive project that will rebuild all of downtown Ottawa and we take it very seriously and for that you need someone with experience and I think Tom brings that," said Melnyk.

Overseeing the LeBreton Flats project will be a huge component of Anselmi's responsibilities, but the Toronto native will also be taking a close look at the organization's current structure as the team struggles to put fans in seats. While the Senators have been competitive on the ice lately, attendance at the Senators' current home, the Canadian Tire Centre, ranks in the bottom third in the league.

"I don't have any preconceived notions," said Anselmi. "Personally it's about organizational excellence, it's about doing your best, it's about being the best experience you can be for your fans, it's about being a great place to work and those kind of things which are the basics for how I like to lead. I don't know to what extent that all exists here, but we'll find out."

While Melnyk praised Leeder's contributions to the organization, he said it's time for the Senators to go in a new direction.

"We need to reinvigorate the brand, we need to re-position things and re-brand. There's a ton of work to do. Cyril was here for 25 years, we came to a crossroads and it was simply time for a change.

"I don't know exactly what was missing, but there was something missing is the best way I can answer it."

Leeder was part of the group responsible for Ottawa winning the bid for an NHL expansion franchise in 1990 and played a significant role in the construction of the Canadian Tire Centre. Melnyk said Leeder was informed of the change Tuesday and took the news "like a pro."

The Senators also announced that they are looking to start next season with a game in Sweden and are still working on the details for an outdoor game in December as part of the country's 150th celebrations as well as the league's centennial anniversary. The game would be held at TD Place with expanded seating to 35,000 to also accommodate the Grey Cup.

"The outdoor game there are some hiccups and they have to do with what we hope is the right attendance number," said Melnyk. "We have an issue, so we're trying to resolve it. We've gone out to the mayor to look at getting some assistance there. We need to be comfortable that we can fill that stadium. That's the big thing so hopefully that works."

Notes: Newly acquired winger Tommy Wingels was in Ottawa and met with the Senators coaching staff Wednesday morning. Wingels was acquired from the San Jose Sharks Tuesday and will provide Ottawa with some forward depth.

The 28-year-old is hopeful to get in the lineup for Thursday's game against the Calgary Flames.

"I want to bring what I can," said Wingels. "I like to play a physical, aggressive speed game. I like to forecheck hard and chip in with some goals and I think that's the identity they have here."