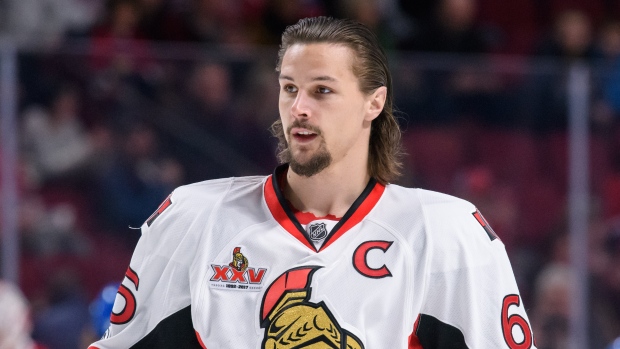 The Ottawa Senators will be without captain Erik Karlsson Thursday against the Boston Bruins and have labelled the defenceman as day-to-day.

Jyrki Jokipakka will draw into the lineup for Karlsson.

Karlsson returned from a two-game absence due to a left foot injury on Monday night. He then injured his right foot in the second game of the back-to-back series with the Red Wings on Tuesday.

He limped to the bench after jamming his foot on the boards after missing a body check in the third period and did not play another shift.

"The guys did a great job in just controlling the game, and we felt it wasn't really necessary to use me at the end, unless we really needed to, and it never got to that point," Karlsson told the Ottawa Citizen. "Just took some ice time off and rested up."

Karlsson owns 17 goals and 54 assists in 77 games this season with the Senators, who can clinch a playoff spot Thursday night.