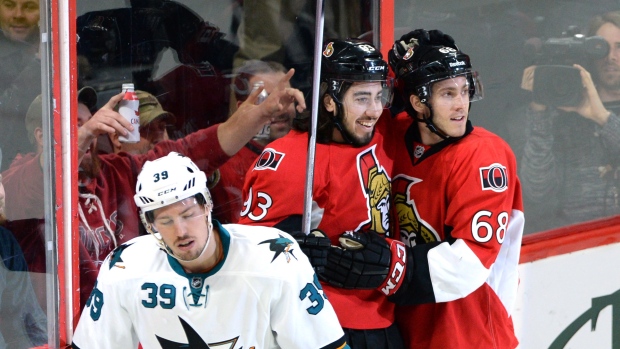 OTTAWA - The Ottawa Senators may be in the eighth and final playoff spot in the Eastern Conference, but they're far from satisfied.

Thanks to a 5-2 win over the San Jose Sharks Monday night Ottawa leapfrogged the Boston Bruins for the final wild card spot in the Eastern Conference. Ottawa has a game in hand.

"We've been chasing it and that's been our goal to get inside the eight so it's real enjoyable," said Ottawa head coach Dave Cameron. "Wins are always nice and they're really nice in this case because we're in the top eight with a day off (Tuesday) so it's a time to sit back and regroup and actually enjoy it for a day."

Joe Pavelski and Chris Tierney scored for the Sharks (35-30-8) as Antti Niemi made 32 saves.

The Senators scored four unanswered goals in the third period — two within 1:12 of each other — on their way to picking up a seventh straight win.

After being stonewalled on numerous occasions Chiasson finally solved Niemi as he deflected Mark Stone's shot and then Pageau scored at the 13-minute mark of the third as he and Karlsson worked the give-and-go.

Hoffman then put the puck away into an empty net for his 26th goal of the season with 1:23 left to play.

"The rush was certainly something that caused us a lot of headaches (Monday)," said Sharks coach Todd McLellan. "They were quick. Whether it was turnovers or we were outnumbered, we fell on one, but three of their four goals came off of it. That's one of their strengths. They used their strength to beat us and we didn't handle it very well."

The Senators did have a scare in the third when Hammond was slow getting up after a collision with San Jose's Logan Couture and Zibanejad left the game after being hit by a Hoffman slapshot, but Cameron said he expects both will play Thursday.

Two quick goals allowed the Sharks, playing their third of six road games, to jump out to a 2-1 lead after two periods.

Pavelski tied the game with a power-play goal at 12:47 as he jumped on a rebound and 30 seconds later Tierney had given San Jose the lead as he took a nice pass from Tommy Wingels to beat Hammond glove side.

Despite giving up the two quick goals the Senators never felt a need to panic.

"There was a quick one that could have been prevented, it was a little bit of a breakdown, but that happens," said Ryan. "Not much needed to be said. This team has a lot of confidence in itself in these games."

Ottawa opened the scoring at the 14-minute mark on Zibanejad's 18th of the season. Hoffman shot a floater at the net and it deflected in off Zibanejad's knee.