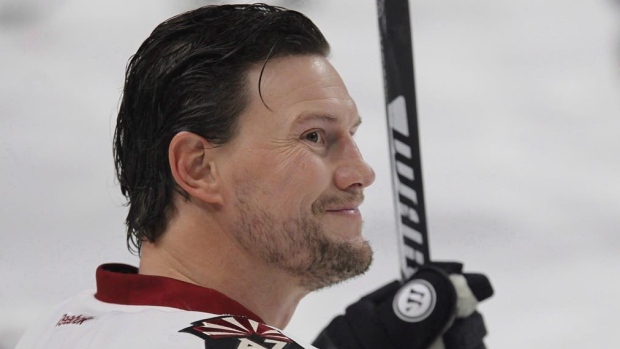 Shane Doan is returning to the Arizona Coyotes as the team's chief hockey development officer.

The Coyotes announced Monday that Doan will also serve as a strategic advisor to team owner Alex Meruelo and general manager Bill Armstrong.

"Shane Doan is a Coyotes legend and a Valley icon," Coyotes President & CEO Xavier Gutierrez said. "For the past 25 years, Shane has been an incredible ambassador for our franchise and has represented the Coyotes with dignity and class. He is beloved by our fan base and we are thrilled to have him back with us where he belongs."

"Shane Doan was a great player who played 21 seasons in the NHL," added Armstrong. "He is highly respected around the League and has a wealth of hockey knowledge to share. He will be a valuable addition to our hockey operations department and I'm really looking forward to working with him."

Selected seventh overall in the 1995 NHL Draft, Doan spent his entire NHL career with the Winnipeg Jets/Arizona Coyotes franchise. He served as captain for each of his final 13 campaigns and retired as the team's all-time leader in games played (1,540), goals (402), assists (570), points (972), power-play goals (128) and game-winning goals (69).

Doan was named to the NHL all-star game in 2004 and 2009, received the King Clancy Memorial Trophy for community service in 2010, and captured the Mark Messier NHL Leadership Award in 2012.

The Halkirk, Alta., native represented Canada at the 2004 World Cup of Hockey, 2006 Olympics and in six world championships.

Since retiring, Doan has worked for the NHL's head office and served on Canada's management team for the 2019 World Hockey Championship.

"I am very excited and grateful for this opportunity," said Doan. "I am extremely proud to have played my entire career for the Coyotes and all I want is for this franchise to be successful on and off the ice. The Valley is an incredible hockey market with a loyal and passionate fan base and with Mr. Meruelo, we now have strong and stable ownership and a very bright future in Arizona. I'm looking forward to working with Mr. Meruelo, Xavier and Bill and I can't wait to get started.

"I'd also like to thank Gary Bettman, Bill Daly, Colin Campbell and the NHL's hockey operations department for the incredible opportunity to work for the League the past three years. I was able to gain invaluable experience that helped prepare me for this opportunity with the Coyotes."