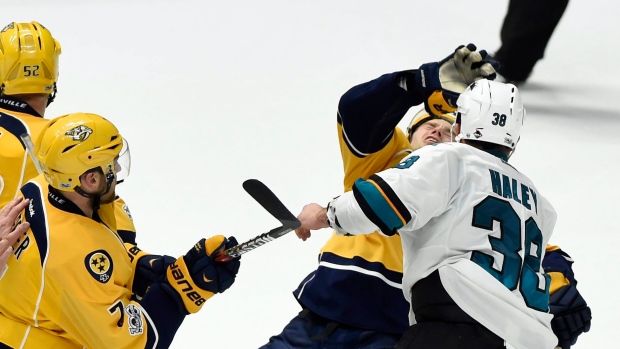 The incident occurred in the final period when Haley punched Jarnkrok in the face after Jarnkrok hit Haley from behind into the boards. Jarnkrok got two minutes for boarding while Haley was assessed a match penalty. Jarnkrok left the ice bloodied after the punch and did not return to action.

Sharks head coach Pete DeBoer did not hold back when asked about the punch after the game.

"When you run someone from behind in a game like that, you probably deserve to get a punch in the mouth," DeBoer said.

Jarnkrok, 25, has netted 15 goals and added 14 helpers over 74 contests this season with the Preds.

Haley will miss Tuesday night's contest at home with the New York Rangers and is eligible to return in time for Thursday night's visit to the Edmonton Oilers.