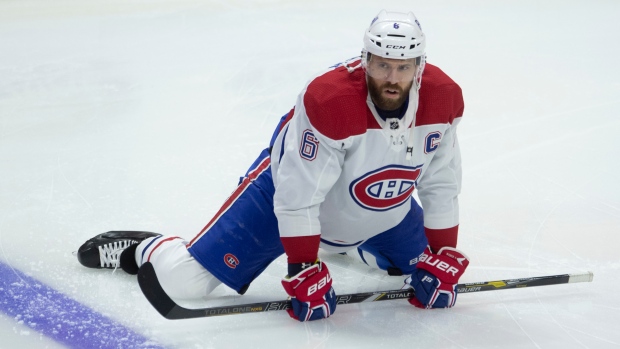 TSN Hockey Insider Darren Dreger reports that it's leaning towards unlikely that Montreal Canadiens captain Shea Weber will play again, and his contract status could end in a dispute between the NHL and NHL Players’ Association.

Dreger notes that the league has not yet commented on Weber's status, but if its stance does not soften, Weber's case "will likely end in dispute with the PA."

Weber is one of the last active players in the league playing on a deal that would include a cap recapture penalty from the front-loaded 14-year, $110 million contract he signed with the Nashville Predators in 2012. He is due just $12 million in actual salary over the next five seasons.

If Weber were to retire, as opposed to landing on long-term injured reserve, the Predators would face a cap charge in each of the next five seasons, starting with a $4.9 million charge in the upcoming season and building to a charge of $24.57 million in 2025-26, the final year of Weber's deal.

Shea Weber’s body is beaten up. Is it possible he might play again? Possible, but leaning toward unlikely. The NHL isn’t commenting, however, based on history of other players granted LTI...if the NHL’s hardline doesn’t soften, this case will likely end in dispute with the PA.

In 2019, Roberto Luongo announced his retirement from the Panthers, leaving Florida with a cap recapture penalty of $1.09 million, and the Vancouver Canucks - who signed him to a front-loaded deal - with penalty of $3.03 million. Loungo's deal marked just the second time a cap recapture penalty was enforced, joining Mike Richards who left the Los Angeles Kings with a penalty after the team terminated his deal in 2015. Other players with back-diving deals, such as Chris Pronger, Marian Hossa and Henrik Zetterberg escaped penalties for their clubs under long-term injured reserve.

Multiple outlets reported Wednesday that Weber could miss all of next season with knee, ankle, and thumb injuries, and is expected to be left exposed in the Seattle Expansion Draft.

The 35-year-old has spent the past five seasons in Montreal after being acquired from the Nashville Predators in a blockbuster swap for P.K. Subban.

The Canadiens captain scored six goals and added 13 assists over 48 games during the regular season and added one goal and six assists over 22 playoff games as the Canadiens made it all the way to the Stanley Cup Final, losing to the Tampa Bay Lightning in five games.

Over 1,038 career games with the Predators and Canadiens, Weber has tallied 224 goals and 365 assists.