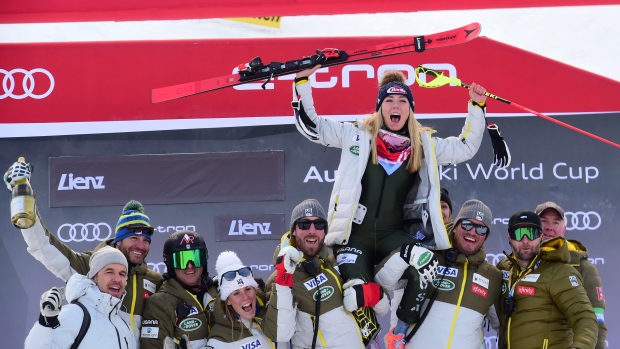 Shiffrin earned her 43rd career World Cup slalom win Sunday with another dominant performance, posting the fastest times in both runs to beat her Slovakian rival Petra Vlhova by 0.61 seconds.

It matches the 43 downhill wins Vonn collected before retiring last season, the World Cup record for a woman in a single discipline — although Shiffrin is still 18 victories short of Vonn's overall women's mark of 82.

And it provided a winning end to an eventful year for Shiffrin, both on and off the course.

While she set a new best mark with 17 World Cup wins in the 2018-19 season and won two world titles, she moved into a new house and saw a two-year relationship with French skier Matthieu Faivre come to an end.

“I feel like I learned a lot, I feel like it’s been emotional. I have gone through a lot of changes and transitions in my life,” Shiffrin said. “I feel like I grew up a lot this last year. I feel like I was 17 last year and all of a sudden I am 24.”

Shiffrin also won Saturday's giant slalom, a win that put her in sole second place behind Vonn on the list of all-time World Cup wins.

And even before Sunday's win, Vonn seemed sure that Shiffrin will pass her mark of 82 before long.

“Can’t wait to see you break the all time record too!” Vonn wrote on Twitter.

Watched by her parents, Jeff and Eileen Shiffrin, among the 5,400 spectators, Shiffrin built a lead of 0.26 seconds over Vlhova in the opening run.

While Vlhova attacked in the second run on a course set by her coach Livio Magoni, Shiffrin even managed to double her advantage over the Slovakian.

“I saw Petra race and thought I don’t know if I can ski that fast. All I can do is try,” Shiffrin said. “I know that if I am skiing my very best slalom, then it should be fast. So it was more of a question today if I would have the courage to be aggressive.”

“It’s really difficult. She is all the time perfect, like today, she did both runs perfect,” Vlhova said. “Second place is good but I always want to do better but today she was the best.”

Sunday’s victory left Shiffrin three short of the overall record for most wins in a discipline held by Swedish great Ingemar Stenmark, who won 46 giant slaloms between 1975-89.

However, the American three-time overall champion did set another record as she became the first skier, male or female, with a podium finish in 14 consecutive slalom races.

The 200 points helped Shiffrin extend her lead in the overall standings to 295 points over Italy’s Federica Brignone. If she receives her fourth crystal globe at the end of the season in March, Shiffrin would match Vonn’s career tally of four overall World Cup titles.

The Shiffrin vs. Vlhova rivalry will continue next Saturday in Zagreb and on Jan. 14 in Flachau, where Vlhova last beat Shiffrin a year ago.

“I am very happy with how I skied, that’s important,” Vlhova said.

Shiffrin and Vlhova have combined to win all 23 World Cup slaloms since January 2017, with the American taking 19 of them, including all six since January.

The pair was far ahead of the rest of the field, with third-place Michelle Gisin of Switzerland 1.73 seconds behind for her first career slalom podium.

Nina Haver-Loeseth of Norway was third after the opening run but dropped to 19th, while Switzerland’s Wendy Holdener was disqualified after straddling a gate in her second run.

Laurence St-Germain of St. Ferréol-les-Neiges, Que., was the top Canadian with a 9th place finish, while Erin Mielzynski of Collingwood, Ont., put together two good runs to finish in 12th.