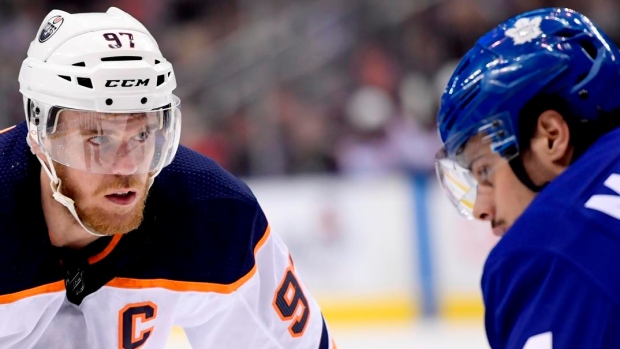 TORONTO — While it’s Auston Matthews’ prolific offensive talent that often helps drive the Maple Leafs’ success, his defensive skill set was a major topic of discussion Wednesday ahead of Toronto’s matchup with Connor McDavid and the Edmonton Oilers.

“He knows, A, it’s required for us to win. B, he’s learned that he’s really good at it and it helps him, and our team get the puck back quicker. It allows him to influence the game in more ways than one. The best goal scorers in the world don’t score every game…so what are you doing when you’re not scoring? That’s where he’s really grown. He’s made the decision. He's just all in on all areas of the game.”

Toronto will need its entire lineup dialled in for the first of nine meetings this season against Edmonton, a team that boasts both McDavid and the NHL’s reigning Hart Trophy winner in Leon Draisaitl.

Matthews’ line with Mitch Marner and Joe Thornton projects to see a lot of ice time against the Oilers’ top skaters on Wednesday, where he’ll be flexing those more evolved defensive muscles while also trying to pad his offensive stats. Through four games, Matthews has one goal and three assists along with a league-leading 21 shots on net.

“[You have to] try to limit [McDavid's] time and space. He's really fast,” said Matthews. “You want to make sure that you're above him. He’s too good of a player to not get a couple of looks and get his chances, but I think on the defensive side of stuff you just want to limit those as much as you can.”

McDavid has been terrific in the Oilers’ uneven start to the season, amassing three goals and five points over a four-game stretch where Edmonton went 1-3-0. Toronto sits atop the North Division at 3-1-0, and Matthews’ defensive strides have already made an impression on his  teammates.

“[Auston’s] got great stick skills. He wins almost every stick battle, and always seems to find a way to come up with the puck,” said Justin Holl. “His key to playing defence…is playing offence, and that way the other team doesn't have the puck. But when he's forced to defend, he's a heavy body and he's physical.”

To hold McDavid at bay on Wednesday – and the other three times Toronto will see Edmonton over the next 10 days – the Leafs will need a high level of buy-in on both sides of the puck from more forwards than just Matthews.

After the Leafs' success using an 11-forward, seven-defencemen lineup in Monday’s 3-1 win over Winnipeg, Keefe is sticking with that look against the Oilers. Holl said slowing down McDavid had been a “major focal point” of the team’s meetings thus far, and every skater out there against him will have a role to play.

“We need to have layers of support,” Keefe explained. “Obviously the defence are the last layer, but forwards need to do their job, starting all the way down in [their zone]. That’s really where a lot of the danger begins, [with] how the Oilers leave their zone, and their best players in particular. They're very dangerous on the rush and that begins in their end. Facing the guy who's number one in the NHL generating chances on the rush, it's going to be the biggest challenge to date for us.”

Toronto was up to that task in at least one meeting against Edmonton last season, when Holl and Jake Muzzin helped limit McDavid and Draisaitl to a combined one point in a 4-1 Leafs’ win. The Oilers stormed back with a better showing in the rematch, complete with a dominating six-point effort from Edmonton’s two stars in producing a 6-4 victory.

To recreate that past success and avoid another letdown, Holl said patience will be a virtue in handling Edmonton’s skill players.

“[McDavid] is definitely a guy that you’ve got to look out for going wide, and a guy that you also can't over-commit to or else he'll cut back on you,” Holl explained. “So that's kind of the main issue; it’s just something you’ve got to figure out, play by play. He's super dynamic, super slippery, hard to get your hands on and he always contorts his body in a certain way that makes it difficult. He’s so fast, suddenly he’s by you [if you’re not careful].”

The early returns from Holl and Muzzin this season have been fairly positive, with Holl boasting four assists and a plus-three rating in four games while they’re averaging around 21 minutes per night as a pairing. So no matter who Keefe sends them out against on Wednesday, Holl is confident the two of them can keep on rolling.

“For Muzz and I, the process doesn't change,” Holl said. “You try to keep tight gaps, breakout clean and play on offence as much as possible. It's not going to be just defencemen, it'll be five men on the ice trying to pick up where [their stars players are] at, whether it's the centre above them on breakouts or defencemen being physical against them in the D zone.”