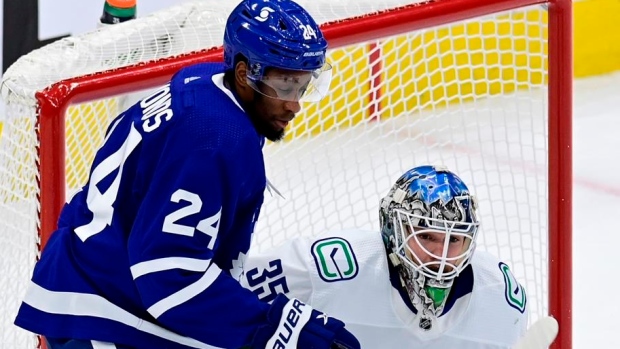 TORONTO — The Maple Leafs’ overflowing infirmary has gained another member in forward Wayne Simmonds, who broke his wrist blocking a shot in Saturday’s 5-1 win over Vancouver and will now be sidelined for six weeks.

"[Wayne]'s a big loss for us; he’s been playing well," said head coach Sheldon Keefe on a Zoom call Monday. "And it’s not just his play; he brings a lot to our room in a lot of other areas and that certainly will be missed. But, like other injuries that we've had, it's opportunities for other people to step up here and that process begins tonight."

Simmonds was hit by a puck shot from Alex Edler late in the third period of Saturday’s game, exiting soon after trainer Paul Ayotte examined him on the bench.

Keefe said further tests over the weekend confirmed what Toronto feared, and now the Leafs will have to forge ahead without one of their most productive forwards of late.

Playing in his first season with the Leafs after signing a one-year, $1.5 million free-agent contract in October, Simmonds had been relishing the opportunity to not only play for his hometown team, but start having a real impact on the ice.

Prior to being hurt, Simmonds had already scored twice against Vancouver, bringing his season total to five goals in his last six games.

Keefe had even moved Simmonds up to play on the Leafs’ second line with John Tavares and William Nylander before Toronto opened its three-game series against the Canucks last Thursday, which they will finish out on Monday night without him.

To that end, Keefe will be returning to an 11-forward, seven-defencemen lineup as the Leafs try for their third straight win over Vancouver.

"In [Simmonds’] absence, it allows us to try different things with the lines and move people around and get other people opportunities," Keefe explained.

"So I suspect we'll have a rotation of people throughout the game filling in with Tavares and Nylander. But not just there obviously; we need all 11 people moving all throughout the lineup."

The shuffling will slide Alexander Barabanov back into the Leafs' bottom-six mix, and more notably opens the door for defenceman Rasmus Sandin to make his season debut.

Sandin hasn’t played an NHL game since March 10, 2020, a span of over 330 days dating back to the final game Toronto played before COVID-19 shuttered the league’s 2019-20 regular season.

Toronto did include Sandin on its roster for last summer’s postseason tournament, but he did not appear in the team’s qualifying-round series loss to Columbus, and has been stuck behind Mikko Lehtonen on the depth chart this season.

Sandin will still be behind Lehtonen in Monday’s game, but involved nonetheless.

"There's not going to be a lot for him out there today," Keefe said. "Mikko is coming off his strongest game [in a two-assist performance Saturday] and he'll be part of the regular six-man rotation and Rasmus will get shifts here and there. We definitely want to get him shifts and get him going...and give him an opportunity that he hasn't had quite yet, so that's more of what today is, giving him that chance."

The Simmonds injury also required changes to be made on special teams, where he’d been a standout lately, scoring three power-play goals in six games.

"We're going to miss him up there; he’s obviously elite on the power play," said Kerfoot. "Wayne has been awesome. He plays hard every day, is consistent in the way that he works, and just the physicality and that mentality that he brings every night. We're going to miss that. But we've been able to rebound throughout this year really well. I think it speaks to the way things are in our locker room right now."

If there’s a bright spot looming for the Leafs, it’s that a few of their walking wounded may soon be ready to return. Keefe said Dermott is a possibility for Wednesday’s game against Montreal, after he, along with Robertson and Thornton, participated in Monday’s skate.

Keefe cautioned though that neither Thornton nor Robertson should be expected back for at least another week or so, especially since both players were placed on Long Term Injured Reserve and there are protocols dictating when they can return. But when that does happen, it will mean a great deal for the Leafs as they weather another stretch without a major player.

"In Jumbo's case in particular, we know that he brings a lot to us and that will help insulate some of that loss with Simmer," Keefe said. "In terms of personality and voice and experience on our bench and in our dressing room, [they’re similar]. We’re just expecting our team to adapt and those that get the opportunity as people leave the lineup, we're expecting them to take advantage of it and keep our team moving forward."