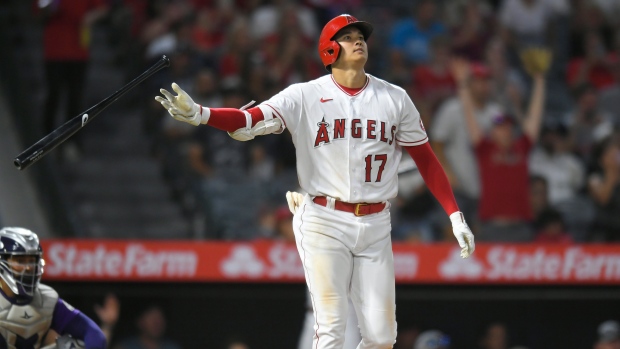 ANAHEIM, Calif. (AP) — Shohei Ohtani continued his power display Wednesday, crushing a three-run home run, and Phil Gosselin had a go-ahead RBI single in the eighth inning for the Los Angeles Angels, who rallied for an 8-7 victory over the Colorado Rockies.

The Angels trailed early but used a five-run fourth inning to jump ahead 6-3 and added another run in the fifth for a 7-3 advantage. The Rockies rallied with three runs in the seventh and another in the eighth to tie the game at 7-all, but Gosselin's RBI single in the bottom of the eighth scored David Fletcher to set the final margin.

Angels closer Raisel Iglesias (7-4) blew a save opportunity for the fifth time when he gave up a game-tying RBI single to Brendan Rodgers in the top of the eighth. He still earned the victory by recording five outs.

Ohtani’s line-drive blast to right field off Rockies reliever Jesus Tenoco was his MLB-leading 37th of the season and his third in the last four games, including consecutive contests against the Rockies. It gave the Angels a 4-3 lead in the fourth.

Trailing 7-3, the Rockies rallied with three runs in the seventh inning on a two-run double from Ramiel Tapia, while Tapia scored on a Fletcher throwing error when the Angels failed to turn a double play.

Tapia had three hits for Colorado, while Trevor Story had a two-run home run in the first inning. Playing amid constant rumors as the trade deadline approaches, Story hit his 13th home run of the season, two days after he was hit on the back of the left-hand by a 97-mph fastball from Ohtani.

Tinoco gave up five runs on five hits and one walk in 1 1/3 innings of work as the Rockies were forced into a bullpen game after scheduled starter Chi Chi Gonzalez was placed on the COVID-19 injured list earlier in the day. Carlos Estevez (2-3) gave up the Angels’ run in the ninth.

After trading right-handed pitching prospect Case Williams to the Cincinnati Reds last year, the Rockies got him back Wednesday in a deal that sent veteran right-hander Mychal Givens to the Reds. Colorado also received right-hander Noah Davis.

Williams, who has made 12 appearances at the low Single-A level, was the Rockies’ fourth-round draft pick last year but was shipped to Cincinnati in a multi-player deal that brought right-hander Robert Stephenson to Colorado.

Rockies: 1B C.J. Cron was not in the starting lineup Wednesday after leaving Tuesday’s game with a right groin strain. … While Gonzalez was placed on the COVID list, RHP Jhoulys Chacin was removed from the same list. The Rockies also recalled RHP Antonio Santos from Triple-A Albuquerque and selected the contract of RHP Jesus Tinoco.

Angels: 1B Jared Walsh, who injured his side Monday, was placed on the 10-day injured list with a right intercostal strain. Matt Thaiss and Gosselin will share first-base duties, with manager Joe Maddon optimistic that it will not be a long IL stint. ... RHP Austin Warren had his contract purchased after RHP Andrew Wantz was optioned late Tuesday. … OF Mike Trout’s recovery from a strained right calf “is changing for good on a daily basis,” according to Maddon. Trout, out since May 17, ran the bases twice last week before pausing his rehab program.

In the opener of a four-game home series against the Oakland Athletics, the Angels will send either Alex Cobb or Dylan Bundy to the mound, depending on how the blister on Cobb’s right index finger has progressed.