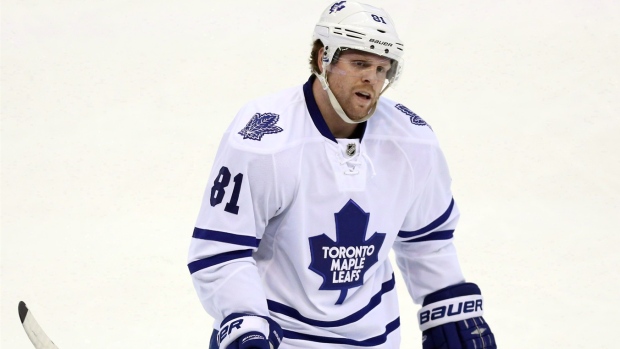 TORONTO -- Age has not mellowed the sibling rivalry between Toronto Maple Leafs star Phil Kessel and his younger brother Blake.

The brothers have been living together along with Leafs centre Tyler Bozak while Blake Kessel, a 25-year-old defenceman, is in Toronto Marlies camp on a tryout.

Blake Kessel said even though they are now firmly in their 20s, the friendly feeling of competition with his brother is still there.

"Whenever we're on the ice together there's always something there," he said. "We try to make sure we don't cross too many paths with that, but it's always been there since we were younger.

"He's a little older so I've always wanted to beat the older brother and he would never let me get it just because he wouldn't want to hear me saying anything about it so its' always been fun and still continues to this day."

Phil Kessel, who turns 27 this week, doesn't deny the rivalry between the two.

"We're real good friends, we're competitive versus each other so there's always little battles in anything we do," he said. "But he's my best friend and it's nice having him around.

"Any game we play is always competitive."

Living with the Kessels, Bozak says its' clear the two are related.

"(Blake) and Phil are pretty much the exact same person. It's nothing new, I'm used to all the things he's doing, they're the same as Phil so its' good," said Bozak. "They're (each) wanting to be right in certain situations about certain things more than the other guy is."

One difference between the two is their comfort with the media. Blake is the more outgoing of the two, at least in public.

"They both have personality, I think," Bozak said. "Maybe they just don't show it as much in the public eye, but, behind closed doors, they both do."

Both Kessels are listed at six-feet, but Blake has a slight height advantage.

"I've got a little bit of height, I got the height on him so I've got that going for me," said the defenceman, who admittedly doesn't get too physical on the ice with his brother. "We skate in the summer there a little bit. Every once in a while I give him a bump or something like that.

"But I've got to live with him, it's his house, so I've got to make sure I can get back in there or else I'll be out on the street."

Blake Kessel, originally a sixth-round pick of the New York Islanders in 2007, has bounced around the American Hockey League and East Coast Hockey League ever since leaving the University of New Hampshire following the 2010-11 season.

Blake and James van Riemsdyk were teammates at UNH, and the Leafs winger recalled the immediate impact the defenceman had on their hockey team.

"He's very cerebral. Has a really high hockey IQ, good stick, good offensively," van Riemsdyk said. "Right when he pretty much stepped on campus as a freshman at UNH he was our best defenceman. He did a great job when he was there."

During the 2013-14 season Kessel split time between the Bakersfield Condors and Orlando Solar Bears of the ECHL while appearing in 11 AHL games with the Rockford IceHogs and Rochester Americans.

In 43 games with the Solar Bears, he had 26 assists and 33 points. The Solar Bears are the ECHL affiliate of the Leafs and Kessel counts that experience as to one of the reasons he's currently at Marlies camp.

"We play a similar type of game in terms of systems as over here so for guys that head down (to the ECHL) it's not going to be a big adjustment in terms of systems," he said. "If you go down there and you work hard and you're ready to go when you come up here, you never know what happens."

The younger Kessel could be in tough to earn a contract with the Marlies.

With the likes of Andrew MacWilliam, Eric Knodel and Kevin Marshall -- all who spent time with the AHL club last season at camp -- plus Petter Granberg, Korbinian Holzer and Stuart Percy likely coming down from the Leafs, the numbers are not in Kessel's favour.

Defencemen Matt Finn and Victor Loov, both Leafs draft picks, will also get consideration with the Marlies.

"(Toronto) was one of my preferred spots, great location and being around Phil and just trying to find a good situation," Kessel said. "Obviously there's a lot of depth here, but I'm just going to try to work hard see how it all plays out."

Having two Kessels in Toronto seems a long shot at the moment, but the brothers are enjoying their time together.

"Obviously me and him are real close so whenever I get to spend time with him, it's a good thing," said Phil Kessel. "Blake's a very good hockey player. He was an All-American in college and he's a really good player so I don't have to give him any advice."