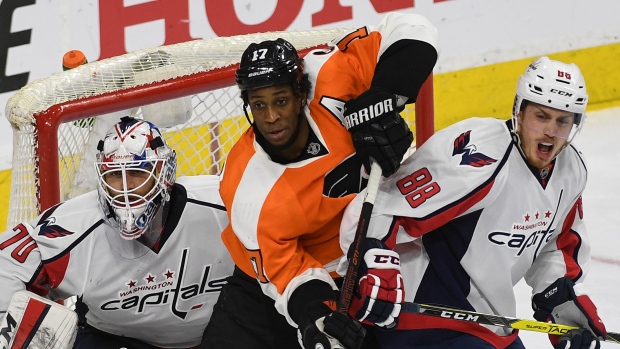 The Philadelphia Flyers finished the 2015-16 season with a 21-9-5 streak to clinch the final wild-card playoff spot in the Eastern Conference.

Winger Wayne Simmonds believes that stretch is a sign of what’s to come for the Flyers, who were eliminated from the playoffs in six games by the Washington Capitals in the opening round.

“I think [the late-season run] makes us really optimistic,” Simmonds told TSN.ca on Wednesday. “We know we have a strong squad, we have good players and, obviously, it took a little bit to adapt to our new coach last year. I think once we put it together, we played really well and that’s evidenced by the second half our season. There’s a lot of optimism going into this year for us.”

As the Flyers heated up down the stretch under first-year head Dave Hakstol last season, so too did Simmonds who set a career-high in goals at 32, peaking with seven goals in the team’s final seven games. The forward, however, was quick to attribute his success to the team.

“I think you can put it all together – coaching, teammates. I think being able to be put in situations where I can succeed, that was huge for me,” Simmonds said. “Playing with some of the guys I play with in [Claude] Giroux, [Jakub] Voracek, (Brayden) Schenn, those guys are pretty good passers so it’s just up to me to bear down to put the puck in the net.”

At 27, Simmonds is on the older end of a young roster with just four players over the age of 30. With a strong group of prospects, including 2015 first-round picks Ivan Provorov and Travis Konecny, and the breakout of defenceman Shayne Gostisbehere last season, Simmonds believes the Flyers are a team on the rise.

“We got a young group and I think if you look within our organization we’ve got a lot of good young players that coming up through the ranks,” said Simmonds. “For us, I think it’s a lot of internal growth, which I think you’ll continue to see with a lot of the young guys as they’re getting better and getting older and more mature. Us as veterans steer everyone on the right path and are making sure that we’re doing the right things.”

Though the Flyers may have a focus on developing young talent, Simmonds did not shy away when asked of the team’s expectations for the upcoming NHL season, noting a playoffs-or-bust mentality.

“We 100 per cent plan on making the playoffs so that’s definitely where our heads are at,” Simmonds said. “We want to be a team where we can get into the playoffs and then make some noise, too. I think with the run we had the last half of the year, I think that’s more indicative of our team than the first half and you’ll continue to see growth from our team.”

The Flyers’ playoff run came to an end in the first round, but the run of their rival Pittsburgh Penguins concluded with captain Sidney Crosby hoisting the Stanley Cup. Simmonds called it a “little bitter” to watch the Penguins have that level of success.

“I think when you have a rival to the height that Pittsburgh is for Philadelphia, it stings a little bit,” Simmonds admitted. “I think it just gives you that much more want to win the Stanley Cup when you see your cross-state rivals holding the Cup up. It’s a little disturbing, but good for them. They did a good job and they had a heck of team and they played really well going down the stretch.”

Simmonds added the image of the Penguins celebrating will serve as motivation for the Flyers when playing the Penguins this year. Simmonds already has the outdoor match between the two teams next season circled on his calendar.

Simmonds was in Toronto this week to prepare for his fifth annual ball hockey tournament, presented by his charity Wayne’s Road Hockey Warriors. Along with Simmonds, fellow NHLers Devante Smith-Pelley, Darnell Nurse, Mike Cammalleri, Chris Stewart, Brayden Schenn, Steve Mason and Michael Latta will be in attendance to lend a helping hand. Female hockey players Hailey Browne, Devon Skeats, and Kelly Terry will also be taking part, adding a female component to the coaching staff for the first time.

“This is something that started a little over five years ago and to this point we’ve had the chance to sponsor close to 20 kids, paying the registration fees, getting them suited from head to toe in brand new equipment,” Simmonds said of his tournament. “[In addition] every kid that comes out and plays in the tournament receives, from the NHLPA, a helmet, a set of gloves and a set of sticks. There’s a ton that we try and do for all the kids and I think the most gratifying thing is just seeing the smiles on the kids’ faces at the end of the day when they’re leaving and they’ve got to meet all the NHL players.”

The tournament will take place on July 9 at McGregor Park Community Centre in Scarborough, Ont.