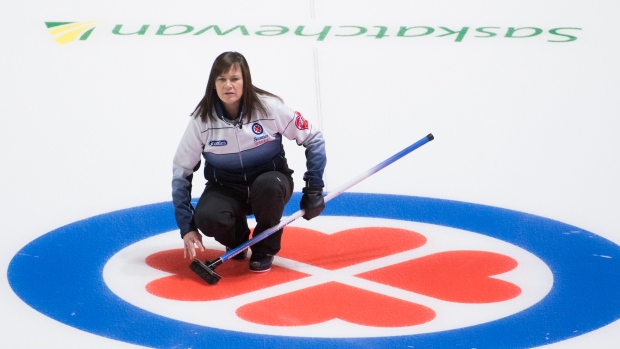 When Mary-Anne Arsenault was planning a cross-country move from Nova Scotia to British Columbia last winter, she wasn't sure whether curling would be in her future.

That feeling of uncertainty "quickly went away," she said.

The two-time world champion considered focusing on senior or mixed team play before deciding to stay on the competitive women's scene. Her new foursome includes Jeanna Schraeder, Sasha Carter and Renee Simons, who teamed with Kelly Scott to win a world title in 2007.

"It gets me through the winter," Arsenault said. "I just love to play and love to compete."

Arsenault has made 14 career appearances at the Scotties Tournament of Hearts, winning five times between 1999 and 2004 with skip Colleen Jones. She represented Nova Scotia again last season with Christina Black, Jenn Baxter and niece Emma Logan, but finished out of the playoffs.

A couple weeks later, Arsenault left Halifax for the Lake Country community in the Okanagan, about halfway between Vernon and Kelowna, B.C.

When teams learned she was heading west, the calls started coming in.

"They all wanted to go hard and a few of them were quite young," Arsenault said. "And I thought, 'I'm not sure if I want to go through all that again.'"

Arsenault, 52, reached out to Carter, who quickly confirmed her interest. Schraeder and Simons were soon on board too, forming a new contender on the provincial scene.

The new rink recently started playing some league games and has plans to participate in a few bonspiels over the coming months. The provincial championships are set to begin Jan. 26 in Kamloops.

Carter, Schraeder and Simons won a Scotties title in 2006 with Scott and defended the crown in '07 as Team Canada. The team underwent some lineup changes before eventually disbanding in 2014.

Several promising teams have emerged on the B.C. curling scene over the last few seasons.

"I think we'll rank right up there with them," Arsenault said. "There's definitely a few strong teams around B.C. and we'll have our hands full. The girls were a little nervous about not being at the top of their game right away since they hadn't been playing for a few years.

"They had only been playing once a week just in a league, so they weren't totally out of the scene. But they haven't lost it at all."

Arsenault, who also plans to play in some senior women's events this season, brings plenty of experience to a lineup that like her, has shone on some of the sport's biggest stages.

"I'm pretty easy to get along with and I think I'm a pretty good teammate," she said. "They were just waiting for a skip to come along and so it kind of fit nicely."

Back in Nova Scotia, Black is handling skip duties on Arsenault's previous team. Baxter moved to third and a new front end of Karlee Jones and Shelley Barker joined the side.

This report by The Canadian Press was first published Oct. 22, 2020.