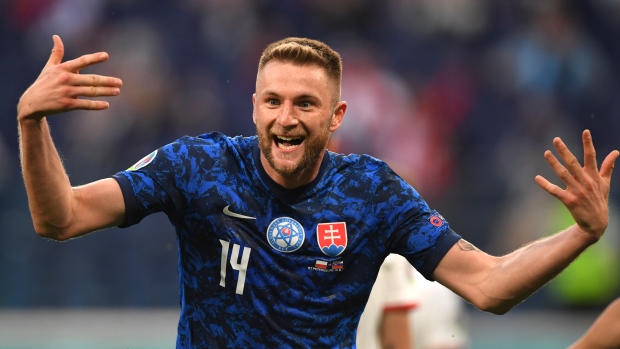 Slovakia proved to be too much for 10-man Poland on Monday as they opened up their Euro 2020 campaign with a 2-1 victory in Group E action from St. Petersburg.

Poland striker Grzegorz Krychowiak was sent off in the 62nd minute for a second booking, marking the first red card of the tournament.

Slovakia opened the scoring in the 18th in what was credited as an own goal to Poland goalkeeper Wojciech Szczesny. Winger Robert Mak broke down the left side, brushing aside two Polish defenders before unleashing a low drive that bounced off of the post, then off of Szczesny and in the net. The goal gave the Juventus backstop the ignominious mark of becoming the first ever goalkeeper to score an own goal at a Euro.

Poland jumped back on level terms almost right after the restart. After a nifty move in the area, Karol Linetty sent a low drive at Martin Dubravka's net. While he didn't get everything on the shot, it was enough to get past the Newcastle 'keeper and tie the game at 1-1. Coming only 32 seconds into the half, it was the second-fastest second-half goal in the history of the Euro.

After enjoying a strong spell of attacking intent to open the half, the second yellow to Krychowiak altered Poland's plans and turned the game on its ear.

Slovakia's numerical advantage gave them a breakthrough in the 69th. Off of a corner, a Polish defender was able to clear the ball from danger, but only as far as Milan Skriniar on the edge of the area.  The Inter defender took one touch before hammering home a beautiful volley to restore Slovakia's lead and wrap up a key three points.

Group E action continues later on Monday as Spain sees its first action of Euro 2020 when it hosts Sweden from Sevilla.