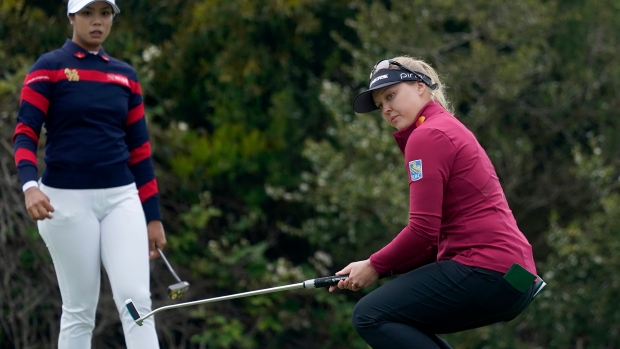 It wasn’t the perfect ending to a brilliant day but overall, Brooke Henderson will take a solid opening round at the U.S. Women’s Open in San Francisco.

Playing in cool temperatures and on an Olympic Club course lined with deep, gnarly rough, Henderson dialed down her usual aggressiveness in favour of accuracy and patience, and the game planned worked well. Despite a three-putt stumble on the final hole, she sits a shot off the lead, her best opening-round position in her nine U.S. Women’s Open appearances.

“I just tried to stay smart and stay calm,” said Henderson, “and I hit a lot of fairways, which I think you have to do here, and a lot of greens.”

Off the tee, Henderson used a mixture of drivers and fairway woods to try and stay out of the nasty rough. It worked as she found 11 of 14 fairways. For a golfer who prefers to swing from her toes off most tees, it was a test of patience, which she passed with ease, thanks in part to a game plan devised with her sister and caddie Brittany.

Her first and worst taste of the deep rough came early in the round when her ball disappeared after hitting driver at the second hole. Her only option with her second shot was to hack it out of the deep stuff and get the ball back in play. That led to a bogey that cancelled out an opening-hole birdie.

From the fairway, however, it was a different story. Organizers moved the tees up and balls that found the short grass meant short irons into the greens. Henderson took advantage of that and ended the day second in proximity to the hole at 24 feet.

Throughout the day she managed to manoeuvre her ball close to the pin, sometimes running it up and on other occasions flying it in and getting it to spin to a stop. On the fifth hole, she ended up two and a half feet from the cup. On the eighth hole, it was three feet. On the 10th and 11th, she ended up four feet and six feet respectively. All four of those were converted into birdies.

“They moved up a lot of tees, which was really nice. Gave some more birdie looks than everybody was expecting,” Henderson stated. “I feel like Brit and I, we capitalized on those quite a bit. Made a lot of birdies, which was fun.”

Even her hot-and-cold putter, which has let her down on past days when the rest of her clubs were working, was warm. She needed just 28 strokes on the greens to complete her day.

There were two blips, however, including the final-hole three-putt, which clearly stung Henderson. The other was a four-footer on the 14th hole that she pushed out to the right, never giving it a chance to find the bottom.

But the good far outweighed the bad on the day and Henderson can ride the confidence of her shot-making and game plan.

“Just try to take advantage of some of those holes that were moved up,” she stated, “and then once you start playing well and start making some birdies, then you get a little bit more confident. Some of [the] tougher holes look a little easier.”

The other three Canadians in the field battled through the difficult course. Rebecca Lee-Bentham of Toronto posted a 5-over 76, and Noemie Pare of Victoriaville, Que., fired a 9-over 80.
Megan Osland of Kelowna, B.C., struggled to a round of 90 and later withdrew.