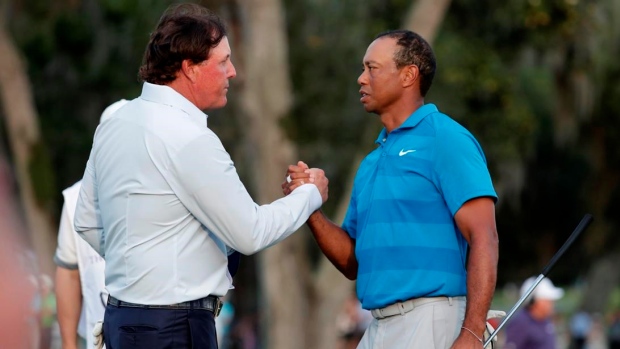 Sunday’s The Match: Champions for Charity will not only provide some live golf with Tiger Woods, Phil Mickelson, Peyton Manning and Tom Brady, it’s also the opportunity to lay down a few bets.

There are some wagers you might want to consider, but first a primer on what the event is all about.

The match will pair Woods and Manning against Mickelson and Brady. It will feature nine holes of better ball and nine of modified alternate shot. The format will be match play.

On the front nine, Manning and Brady will each be given a stroke on three holes: a par three, a par four and a par five to be determined by the organizers. Both players have single-digit handicaps.

In Canada, the broadcast can be seen on both Headline News and CNN starting at 3 p.m. ET.

When the PGA Tour season was halted, neither Tiger Woods nor Phil Mickelson was in prime form.

Woods was last seen at the Genesis Championship in mid-February, where he hobbled around on the weekend shooting rounds of 76 and 77. The extended break may have allowed him to heal.

Mickelson missed the cut in four of his five starts in 2020, although he did have a third-place finish at Pebble Beach. He’s also never played Medalist while Woods is a member.

Of the two quarterbacks, Manning has the lower index at 6.4, although Brady is no slouch at 8.1.

The Bet: With the games of all four players being somewhat unpredictable, there’s lots of value in the underdogs.

Who Will Win The Back Nine (tie no bet)

While the front nine will be a better-ball format, meaning most of the play will likely come from Mickelson and Woods, the back will feature a modified alternate shot. All four players will tee off and each team will select the best drive. The two players will alternate shots from that point. Those will require Manning and Brady to pitch in, figuratively and possibly literally.

If we listen to Mickelson, Brady is a solid putter and has a good short game. But overall, the Woods-Manning duo is simply better and will have more local knowledge from which to draw. As well, Woods has always been clutch down the stretch.

The Bet: Go with the favourites who will have more chances for birdies than the underdogs.

On the PGA Tour, Mickelson is averaging 10 yards more off the tee than Woods (301-291). And with the state of Woods’ back unknown, no one is sure just how hard he can swing.

The Bet: Load up on Phil.

Will Either Team Hole a Shot from Off the Green

Woods and Mickelson are two of the best with wedges in their hands in golf history. Both have made iconic chip-ins over their careers.

Also, with the back nine being a modified alternate shot, there’s a good chance the pros’ drives will be used requiring a second shot from the amateurs. This could result in more missed greens and more opportunities for wedge play.

The Bet: Go with yes

Hole on Which the Match Will be Won

The last time Woods and Mickelson faced off in a match back in 2018 it went to extra holes. Last weekend, the Rory-Dustin vs. Rickie-Wolff tilt also required an extra hole (although it used a skins format). Seeing the trend here?

The Bet: Go 18 holes or extras