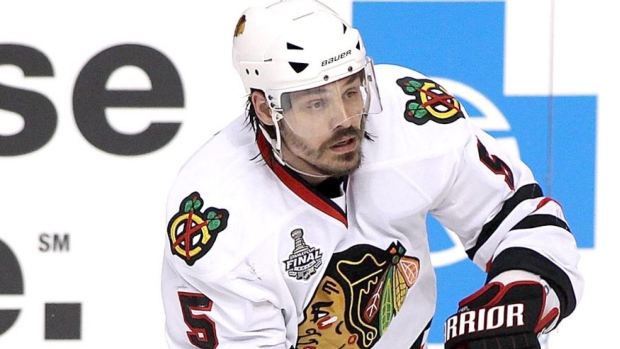 Former Chicago Blackhawks defenceman Brent Sopel, a member of the 2010 Stanley Cup championship team, said almost every player and coach was aware of the allegations of sexual misconduct levelled by a former Blackhawks player against former video coach Brad Aldrich.

In an interview with TSN on Tuesday, Sopel, who played 22 games for the Blackhawks during the 2010 playoffs run, said that the Blackhawks locker room was abuzz for days with discussion about Aldrich during the 2010 Western Conference finals, after then-skills coach Paul Vincent asked Blackhawks management during a meeting in San Jose to report Aldrich’s alleged sexual assault of two players that season to police.

“…I’d say pretty much every player said, ‘Holy s--t’ and was shocked by it,” Sopel said. “We were all in the same dressing room. It was something that was discussed for at least two or three days. [Then head coach Joel] Quenneville was in the same office as [Aldrich]. We heard about it.”

In a statement sent to TSN on Tuesday, Quenneville, who is now the Florida Panthers head coach, denied being aware of the abuse allegations in 2010.

“The allegations in this lawsuit are clearly serious," Quenneville wrote. "I first learned of these allegations through the media earlier this summer. I have contacted the Blackhawks organization to let them know I will support and participate in the independent review. Out of respect for all those involved, I won’t comment further while this matter is before the courts.”

Montreal Canadiens general manager Marc Bergevin, who was Blackhawks director of player personnel during the 2009-10 season, has also said he was not aware at the time that players had made complaints against Aldrich and was not involved in a meeting to discuss them.

Sopel said he assumed for years that Blackhawks management had alerted authorities following the 2010 season. He said he was wary about speaking publicly about the scandal for the past few months out of concern the Blackhawks might attack his charity, The Brent Sopel Foundation, which raises funds for children who, like him, have battled dyslexia.

Sopel now hopes that other players from that Blackhawks team will speak publicly about what they were told about Aldrich in 2010.

“I understand that doing the right thing is hard,” said Sopel, who played three seasons with the Blackhawks before he was traded to the Atlanta Thrashers after the Cup championship in 2010.

“A lot of those guys who were on that 2009-10 team are still with the Blackhawks getting paid and they're either still playing, or in broadcasting or coaching, management or scouting or being an ambassador for the team. That’s why they are not saying anything. Guys want to protect their jobs. But they should still be doing the right thing and telling the truth publicly about what happened.”

Blackhawks captain Jonathan Toews told The Athletic website in late June that he first heard about allegations against Aldrich right before training camp before the 2010-11 season. Toews said he was "annoyed" when The Athletic quoted an unnamed Blackhawks player saying every player on the 2009-10 knew about the alleged assaults because "it seemed like it fed the fire a little bit.”

"As far as I know, some guys may have caught whispers of it and some guys were clueless until the next year," Toews said. "I don’t think that was an accurate statement.”

Sopel’s interview with TSN marked his first public interview about the scandal after he posted comments on Twitter on June 25 criticizing the Blackhawks and National Hockey League for how they have responded to the abuse allegations.

The allegations against the Blackhawks, first made public in a pair of lawsuits against the team in May, have rocked the hockey world.

A one-time Blackhawks player who is identified in court documents as John Doe 1 filed a lawsuit against the NHL team that alleged Aldrich sexually assaulted him and a teammate during the 2009-10 season. After the team's sports psychologist James Gary told the player he was to blame for the incident, Blackhawks management then covered up the assaults, the player alleged.

A second lawsuit against the NHL team alleges that the Blackhawks gave Aldrich a job reference after he left the franchise during the summer of 2010. That lawsuit was also filed in May by the family of a former high school hockey player in Michigan who Aldrich was convicted of sexually assaulting in 2013.

“That’s the most disgusting thing I’ve ever heard in my life,” Sopel said. “They gave him a job reference after what he did to their players. Everybody assumed the Hawks would do the right thing but clearly, they didn’t.”

After he left the Blackhawks, Aldrich also worked as director of hockey operations with Miami University in Ohio. During his four-month tenure at that school, two adults filed complaints of sexual misconduct against Aldrich.

Sopel said he also understands why some players would be hesitant to speak out publicly about sexual abuse.

“Other sports like baseball, basketball and football, most of those guys are going to university for at least a few years and growing up a bit more,” he said. “In hockey, we’re moving away from home at 15 to play junior hockey, riding 25 hours on a bus. Our lives are only hockey. That’s it. Everything revolves around the sport. Many guys aren’t equipped to talk about anything else.”

Former NHL player Sheldon Kennedy said in an interview on Monday that he has been disappointed by the Blackhawks’ response and hopes that other players from the 2009-10 team publicly corroborate that the alleged abuse was well known within the NHL team.

While the Blackhawks have hired the Chicago law firm Jenner & Block to investigate the abuse allegations, the team filed court documents on Friday, July 9 claiming the team did not have a legal obligation to report the abuse claims to authorities because the alleged victim was not a minor, disabled, or over the age of 65 and living in an assisted care facility.

The Blackhawks on Friday also alleged that the team should not be held responsible for the abuse of the teenage hockey player in Michigan because any job reference letter that the NHL team may have given Aldrich was not meant specifically for that coaching position.

“It’s always deny, deny, deny,” Kennedy said. “When you’re making a conscious decision to sweep abuse away and hide it, this is not a mistake. A decision was made and now there’s an ethical responsibility for them to do the right thing. Do they not consider themselves role models for communities and young people? Is this how we want to teach our kids and those people who look up to us how to handle problems?”

Kennedy said he remembers how he felt in 1996 after coming forward to make an abuse allegation against his former junior hockey coach, Graham James.

Kennedy recalled the many times NHL commissioner Gary Bettman has referred to the league as a “family.”

“The silence in this Blackhawks case speaks loudly,” Kennedy said. “This hockey family. Any time anyone in the family says anything to contradict the NHL, they get shunned from the family. What kind of family is that?”