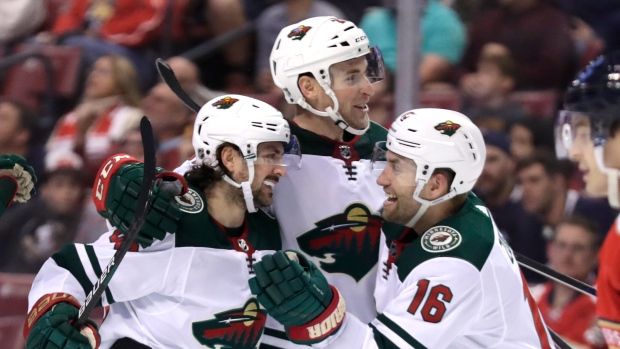 SUNRISE, Fla. — The Minnesota Wild had to come from behind to get another win and keep their point streak going.

Carson Soucy scored the go-ahead goal early in the third period to rally the Wild to a 4-2 win over the Florida Panthers on Tuesday night.

Soucy broke a 2-2 tie after he backhanded the puck between Driedger’s pads at 4:49 of the final period. The goal was the first game-winning goal for Soucy.

“That was awesome,” Soucy said. “To come from behind and just to help get the team a win. We’ve been doing a good job getting points lately, it’s nice to contribute to that.”

“I felt pretty good,” Kahkonen said. “Obviously they had a couple of pretty good shots in the first period, the goals. But I think we as a team we stuck with it and in the second period we came out and started putting some pressure on them and then we got some chances and tied the game and went from there.”

Kahkonen narrowly missed an empty-net goal in the final minutes when he cleared the puck and it went just wide of the net.

“The first thing is to get the puck out of the zone, but if you can shoot it in the net, obviously you can try and go for it. But missed it,” Kahkonen said.

Kunin got an empty-netter with 1:01 left.

Kahkonen made his first start since a 3-2 win over the New Jersey Devils on Nov. 26.

Aleksander Barkov and Jonathan Huberdeau scored for the Panthers, who have lost four of their past five games. Chris Driedger made 22 saves in his second straight start.

The Panthers scored two goals in the first period but weren’t able to build on the lead.

“We just got away from the things we did in the first period. Started turning over pucks and that’s the result,” Barkov said.

Trailing 2-0, the Wild closed within one when Zucker grabbed a loose puck, moved past defenceman Mike Hoffman and skated in on a breakaway, and backhanded the puck high into the net with 10:34 left in the second.

Zuccarello tied it 2-all when his shot from the right circle went between Driedger’s pads with 7:04 left in the middle period.

Barkov gave the Panthers a 1-0 lead on his power-play goal midway through the first as his shot from the left circle beat Kahkonen on the stick side.

Huberdeau doubled the Panthers’ lead when he fired a shot past Kahkonen with 5:34 left in the opening period.

NOTES: Wild D Jared Spurgeon left the game in the first period with an upper-body injury and did not return. ... C Mikko Koivu left in the third period and did not return…D Greg Pateryn, who had surgery Oct. 1, was assigned to AHL Iowa on Monday for a conditioning assignment...Panthers C Jayce Hawryluk missed his 14th straight game.