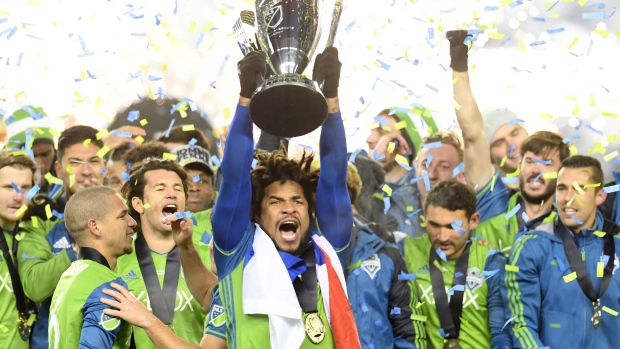 TORONTO — While the Seattle Sounders celebrated with the Philip F. Anschutz Trophy after the MLS Cup final, numb Toronto FC players tried to process what had just happened.

There are few more painful ways to lose a championship game than by penalty shootout. But there is salt in the wound when you hold the opposition to no shots on goal in a 0-0 tie over 120 minutes, only to lose the ensuing shootout 5-4 on a bone-chilling night on home soil.

"It can be a cruel game sometimes," said a despondent Toronto captain Michael Bradley, who sat in his locker-room stall looking like he had been hit by a truck.

"It's not easy," added striker Jozy Altidore. "It's a really crappy feeling obviously."

"It all happened so quickly and it's over," said goalkeeper Clint Irwin, who looked like a ghost. "You don't really know what to feel or what to do. It's just over. There's no words to describe it."

It took Toronto FC 10 seasons, nine coaches, 324 regular-season and six playoff games to finally get to the championship game. Some 3.49 million fans went through the turnstiles before the 36,045 lucky ones Saturday night.

Toronto got there having set an MLS record 17 goals in these playoffs. But they could not beat Stefan Frei, named MLS Cup MVP.

The former Toronto FC 'keeper made a brilliant save in the 108th minute, using his left hand to claw away a looping Altidore header from the top corner. Frei somehow extended himself like Inspector Gadget to preserve the tie.

"He made a great save, kept his team in the game," said Altidore. "It was going to take something special, either to win or in that case to keep them alive and they got that play."

Frei was modest about his miraculous stop.

"Sometimes you throw technique out the window and just make the save," he said.

Frei, who spent five seasons in Toronto where he lost his starting job mostly to injury, credited Seattle's coaches for believing in him.

Altidore, Benoit Cheyrou, Will Johnson and Drew Moor scored in the shootout for Toronto. Frei stopped Bradley on Toronto's second attempt and Justin Morrow hit the underside of the crossbar with Toronto's sixth attempt.

Defender Roman Torres then stepped up and beat Irwin to end the drama.

It was a bitter pill for Toronto to swallow after a game where the tension was ratcheted up as the night wore on, with Toronto turning the screws. The shots were 19-3 in Toronto's favour (7-0 in shots on target) after 120 minutes but Seattle defended stoutly.

The Sounders' zero shots on target and three total shots were both MLS Cup records. And it was the first 0-0 MLS Cup final in regulation time.

"We were the better team but at the same time, Seattle, their game plan was to be unspectacular, to just kind of absorb pressure and try to stay in the game as long as they could," said Altidore. "Credit to them, they did. And we just weren't able to find a way."

Seattle, which was mired near the bottom of the league in mid-July, becomes the 11th team in league history to win the championship.

"I'm sure another 10 years from now I'll be able to really reflect and make sure I soak this in, because it was a tremendous moment and one that may never come around again," said head coach Brian Schmetzer.

Nine of the previous 20 finals had also required overtime with three of those going to penalty kicks.

Toronto had chances in extra time. Substitute Tosaint Ricketts shot just wide early in the second half with Frei rooted to the spot.

Toronto had the better chances in the first half but could not break down a well-organized Seattle side. Bradley and Sounders skipper Osvaldo Alonso both stood out, breaking up plays and sending the ball the other way.

Torres, who was also immense on the night, and veteran centre-back partner Chad Marshall did not yield an inch.

It was a tense second half, with both teams knowing one mistake could cost them the Cup. As the clock wound down on regulation time, Toronto had outshot Seattle 12-3 (3-0 in shots on target). Two of the Sounders shots were off-target and the third was blocked.

It was almost decided in second-half stoppage time but Frei got to a bouncing ball off a Bradley corner just before Altidore did. Frei paid the price, running into the burly forward.

Both teams' star men had quiet nights. Striker Sebastian Giovinco was treated like a pinata by Seattle defenders. Uruguayan playmaker Lodeiro was kept in check by Toronto.

An exhausted Giovinco came out in the 103rd minute, replaced by Ricketts.

The championship game, just 15 days before Christmas, was the latest ever on the MLS calendar. The previous latest was Dec. 7, in 2015 and 2013.

The league said temperature on the field at game time was -2 C (28 degrees), the second-coldest temperature reading for an MLS Cup final. The temperature at the 2013 final in Kansas City hovered around -6 Celsius (22 F) at kickoff, making it the coldest match since 2003 when the league first started recording game-time temperatures.

None of the Toronto starters wore tuques in the warmup. Some of the Sounders, in contrast, looked like they had dressed for the ski lodge.

But you could see the players' breath and feel for the kilt-wearing flag-bearers during the anthems. Most of the record capacity crowd of 36,045 at BMO Field stood during the match, probably to keep their feet moving.

"We can only thank every person in this city for their support and for the passion and the emotion and the energy that they put into this together with us," said Bradley. "I'm sick to my stomach that we couldn't reward them with the biggest trophy tonight."

The travelling Seattle fans likely needed an air traffic controller to find their seats high in the corner of the East Stand.

It was physical from the get-go.

The early chances went to Toronto with an Altidore shot deflected wide in the second minute and then Frei getting down to stop a weak shot from Jonathan Osorio in the 15th. Seattle had its moments but could not convert them into scoring chances.

Seattle, looking to strike on the counter-attack, failed to put a shot on target in the first half. Toronto managed three. Toronto built the shot count to 10-0 (3-0 in shots on target) after 60 minutes.

Saturday's game pitted two championship-hungry franchises with heavyweight fan followings. Seattle, which joined the MLS fold in 2009, led the league in attendance averaging 42,636 per game at CenturyLink Field. Toronto, which came on board in 2007, was third — behind Orlando — at 26,583.

Saturday's record crowd was made possible by temporary seats left over from the Grey Cup.

Pre-game social media messages of support for the home side came from all quarters, from Drake to the prime minister.

"At #BMOField in my long underwear," tweeted TV personality Drew Carey, a minority owner in the Sounders.

There were five points separating the sides during the regular season with Toronto (14-9-11) third in the East and Seattle (14-14-6) fourth in the West.

The Sounders' season turned on July 26 when assistant coach Schmetzer replaced Sigi Schmid, the team's only head coach. Seattle, ninth in the West with a 6-12-2 record at the time off the coaching change, went 12-3-4 since en route to the final.

Toronto also arrived on a roll, having lost just three times since mid-July (12-3-5).

"I know their heads are down now but they'll come back fighting once we start pre-season next year," said Toronto coach Greg Vanney, who described himself as numb.