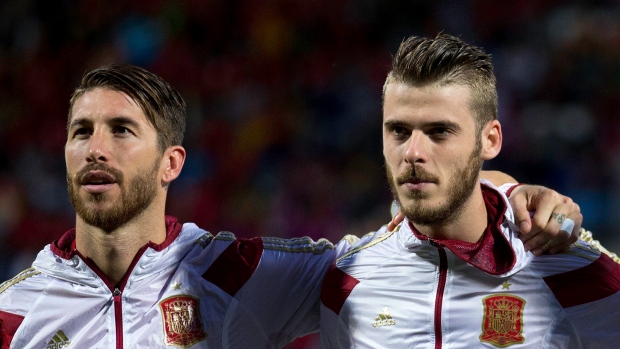 While World Cup-holder Germany received a relatively kind qualifying draw on Saturday, reaching the 2018 finals in Russia will be no easy task for some of Europe's traditional powers.

Italy, the 2006 world champion, paid the price for recent poor results by being drawn once again in qualifying with 2010 winner Spain in Saturday's ceremony at Konstantin Palace.

"It will be very stimulating for our team," Italy coach Antonio Conte said through a translator in St. Petersburg. "Spain is very strong."

Spain ended Italy's European Championship hopes in the 2008 and 2012 finals before they both embarrassingly exited the last World Cup in the group stage.

"The World Cup was a slight misadventure, the same as for us," Conte said. "At the moment, they are constructing something new."

The heavyweight group is undoubtedly A. Either France, Sweden or the Netherlands, which finished third in the 2014 World Cup, will not be going to Russia.

There is only one automatic place from each of Europe's nine groups. Eight of the best second-place teams from the continent's nine groups will get a second shot at reaching Russia through the playoffs.

France prepares for Group A, which also features Bulgaria, Belarus, and Luxembourg, knowing it has not beaten the Dutch in a competitive match since Euro '96, and lost to Sweden at Euro 2012.

"It's not really easy to think after the draw, do we qualify for the next World Cup?" France coach Didier Deschamps said. "It won't be very easy."

Many teams would relish the start Germany has to its title defence from September 2016, and it was thanks to Germany team manager Oliver Bierhoff who drew the European groups. Group C is seemingly straightforward with Czech Republic the strongest rival for Germany, and other games with Northern Ireland, Norway, Azerbaijan, and San Marino.

"I'm happy that we won't play against France or Italy," Bierhoff said.

Cristiano Ronaldo's Portugal also should not be too concerned about Group B with matches against Switzerland, Hungary, the Faeroe Islands, Latvia, and Andorra.

For the first time in a World Cup qualifying draw, England and Scotland were paired together. The neighbours played the first international match 143 years ago.

"That's the fixture which is going to capture the imagination because England-Scotland fixtures go back a long, long way, and there's been many a fierce encounter over the years," said England coach Roy Hodgson, who hopes his contract is extended after it expires next year.

Adding to the intrigue for the neighbours could be the lingering effects of Scotland's 2014 independence referendum, when the majority voted to stay part of Britain. Group F also features Slovakia, Slovenia, Lithuania, and Malta.

The other groups are:

James Ellingworth and Ronald Blum contributed to this report.

Rob Harris can be followed at www.twitter.com/RobHarris