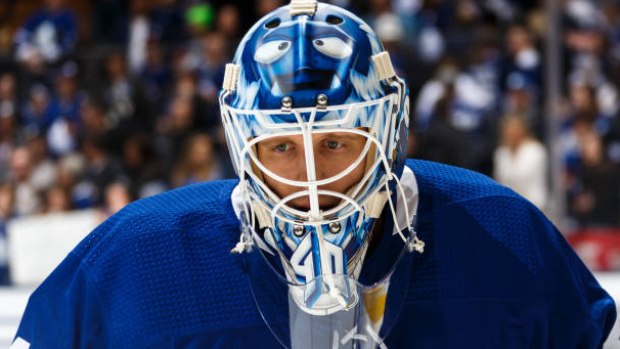 TORONTO – For at least the next 10 days, goaltender Garret Sparks is on hiatus from the Toronto Maple Leafs. What happens after that has yet to be determined.

It was early Friday morning that the Leafs recalled goaltender Michael Hutchinson from the American Hockey League’s Toronto Marlies, a signal that something was amiss with either Sparks or starter Frederik Andersen. Sparks didn’t show for the Leafs’ practice later in the day, with his dressing room stall emptied and replaced with Hutchinson’s equipment.

It all led to the news of Sparks’ sabbatical, during which he’ll work one-on-one with goalie coaches Steve Briere and John Elkin, along with the Marlies’ extras. That ruling came down days after Sparks’ last start on Tuesday, a 4-1 loss to the Carolina Hurricanes that marked the goalie’s seventh defeat in eight games.

“We believe in Sparky,” Leafs coach Mike Babcock told reporters on Friday. “So we went back to the well a number of times, and when we didn’t get it worked out or where we needed it to, we made this decision.

“The way we chose to do it was to do everything we could to help get his game where it needed to be, and now the team is way more important than any individual.”

That is TOR’s fourth call up from the AHL since the trade deadline (Moore, Rosen, Marincin, Hutchinson). Teams are only allowed four, until the AHL team is eliminated from the playoffs anyway.

Hutchinson said he learned of the recall Thursday afternoon, so the organization knew what was in store for Sparks before he backed up Andersen against Tampa that night.

Even if the move surprised Sparks' teammates, they have little time to dwell on it. As a group, the Leafs are locked into preparations for their final regular season game Saturday in Montreal, followed by another first-round series with Boston that’s expected to start on Thursday. Should Andersen not be able to perform for any reason during that series, Toronto will need a reliable backup and Sparks has been the antithesis of that through the second half of his first full NHL campaign.

Since Dec. 28, the 25-year-old has appeared in 12 games, coupling a 3-8-0 record with an .898 save percentage. After several of those losses, Sparks lamented about the saves he should have made and his positioning became more erratic as his struggles intensified.

First-year general manager Kyle Dubas still opted to offer Sparks a one-year, $750,000 extension on March 5, after he’d lost four of his previous five starts. That did little to boost Sparks’ confidence and two weeks later, during a particularly bad stretch for the Leafs where they allowed 23 goals in four games, Sparks publicly chastised his team for not showing enough “emotion” in a 6-2 loss to Ottawa.

“Over a period of time, things weren’t going the right way,” Babcock explained. “I’ve been with a lot of goalies over the years, and there are times where it doesn’t go as good and you offer them 10 days off and they work with the goalie coach and get it back.”

The question is whether it would even make sense to bring Sparks back into the fold this season - midway through a first-round playoff series or after advancing to the second round for the first time since 2004. Babcock wasn’t willing to delve that far into the future. Not yet, anyway.

“Let’s not get ahead of ourselves, let’s go through the process here,” he explained. “Right now all we’re worried about is this year. Right now what we’re doing is, Hutch is here and Freddie is here and we’ll go from there. [Sparks] won a Calder Cup for the organization last year. It’s important we treat him right and help him get his game to the level he should be at.”

It’s that history with the organization that won Sparks his job in the first place. Drafted 190th overall, by Toronto in 2011, he led the Marlies to a Calder Cup championship last spring and was named the AHL’s most outstanding goaltender in the regular season.

Two years before that, Sparks became the first goalie in Leafs’ history to record a shutout in his NHL debut, turning aside all 24 shots faced against Edmonton and memorably becoming emotional on live television while being told of his historic feat.

Dubas was the Leafs’ assistant general manager and GM of the Marlies at the time, before being promoted to his current post last May. And it was ultimately Dubas’ decision to keep him as the Leafs’ No. 2 out of training camp, sacrificing veterans Curtis McElhinney and Calvin Pickard on waivers to secure Sparks’ immediate future with the club.

At the time, Babcock said it was the breadth of Sparks’ experiences with the Marlies and Leafs - not necessarily his showing in camp or the pre-season - that won him the job.

And Sparks initially thrived in his new role, going 4-1-0 out of the gate while also tossing in a 34-save shutout of the Philadelphia Flyers. But as play around the league ramped up, Sparks just couldn’t keep pace.

Now it falls on Hutchinson to fill in if needed, as Sparks tries to recapture his own spark.

“We need him to get [his game] back, he needs to get it back,” said Babcock. “It’s real important as an organization we help him out and he helps himself."