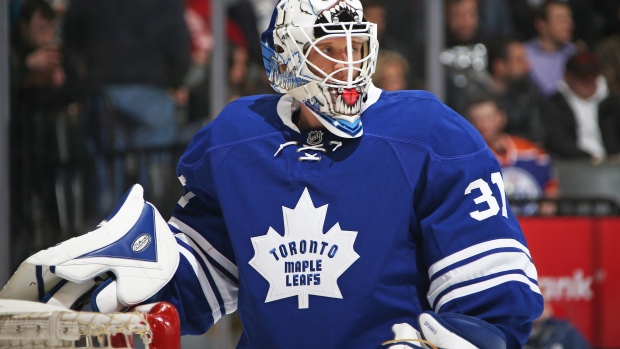 TORONTO – Toronto Marlies’ goaltender Garret Sparks has been suspended indefinitely by the Toronto Maple Leafs for violating team policy after directing violent and sexist language toward a user in an online group.

Sparks did not dress for the Marlies on Friday or Saturday.

“[Garret] was sent home for some team policy reasons when we were on the road trip there [in New York],” Marlies head coach Sheldon Keefe said after Saturday’s 4-1 win over the Utica Comets. “I’m familiar with the circumstances, but we’re not going to comment any further from there. Management handled the situation.”

The Maple Leafs released a statement saying they were aware of the incident and that it had been addressed directly with Sparks.

The suspension stems from an incident that came to light on November 22.

According to users in a Facebook goalie group for which Sparks is an administrator, members of the forum were mocking a disabled person and Sparks came to that person’s defence by asking one of those in the forum where he lived and writing, “I want to go to open hockey with you, drag you out to center ice and beat you into a [expletive] pulp until you can’t run that [expletive] little mouth of yours. God, you sound like a 13-year-old girl.”

When another member reprimanded Sparks for insulting women, he apologized and continued, “Girls don’t even whine as much as this guy does.”

Keefe said there is no timetable for the goalie’s return. His status will be reevaluated by the team in the next week. Sparks could not be reached for comment.