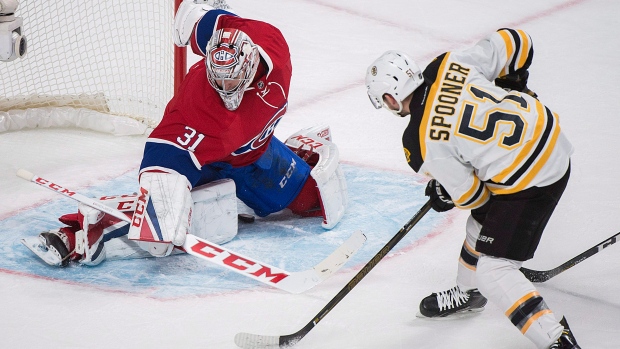 MONTREAL — The Canadiens and Bruins added to their rivalry on Monday night.

In what quickly became an old-school style contest between long-time divisional opponents, Boston ultimately got the better of Montreal 2-1 in overtime when Ryan Spooner scored at 3:20 of the extra period.

"You saw a lot of hitting tonight," said Bruins coach Claude Julien. "A lot of borderline hits, something we hadn't seen between these two teams for a while. The fans seemed to love it.

"We'll try to keep within the rules and continue to make some exciting games between the two teams."

It didn't take long for the bad blood to spill over in the 737th all-time game between the Bruins and Habs.

Alexei Emelin set the tone for the encounter 13 minutes in with a big shoulder-to-shoulder bodycheck along the boards on young Bruins phenom David Pastrnak.

Torey Krug answered seconds later with an elbow to the head on Andrew Shaw in open ice in the neutral zone. The Habs winger went straight to the dressing room but was back for the start of the second period. There was no penalty on Krug on the play.

Montreal's Brendan Gallagher disagreed. Gallagher took matters into his own hands, dropping the gloves with Krug with five minutes remaining in the first.

"When you see your teammate get up the way Shaw did, he had blood coming from his face, Shaw would have done that for every guy on this team," said Gallagher. "It's tough whenever you play this team. A lot of emotions involved.

"There's a lot of respect between these two teams, a lot of history. Today it got a little heated."

The teams combined for 65 hits on the night.

Spooner scored the winner with 1:40 remaining in overtime, beating Carey Price five-hole on a breakaway. The Canadiens challenged the goal, claiming Spooner was offside entering the zone, but the goal stood.

Minutes earlier David Krejci looked to have given the Bruins (16-12-2) the victory but referees determined Pastrnak had interfered with Price, preventing him from making the save.

"That was a fun hockey game," said Nathan Beaulieu. "It was one of the toughest games we had this year. We put on a good show for the fans.

"We knew it was going to be physical. You know what to expect with this rivalry."

Paul Byron scored late in the third period to salvage a point for Montreal (19-6-4). After a scramble in front of Tuukka Rask's net, the Bruins goalie lost track of the puck as Byron backhanded home his 10th of the campaign.

Earlier in the game, Austin Czarnik broke the scoreless draw with 1:05 remaining in the second period. The 24-year-old beat Price for his third goal of the season as he fired a shot between Price's pad and blocker while on a 2-on-1. Beaulieu was the lone defenceman back, but his sliding effort just missed Czarnik's shot.

Price had denied Czarnik on a partial break earlier in the second period.

"The last time I went up high and he got it with his stick," said Czarnik. "So I figured I would just shoot it low, just get it on net and create something and it went in."

Rask made 30 saves for the win. Price stopped 27-of-29 shots in defeat, just his fifth loss of the season.