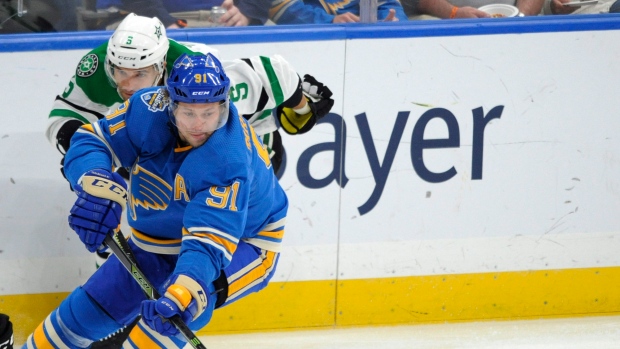 The team announced Monday that the star winger will be placed on injured reserve and will be re-evaluated in five months. He sustained the injury in a win over the Los Angeles Kings last Thursday and had not played since.

Tarasenko left Thursday night's 5-2 win over the Kings after getting tangled up with Kings defenceman Sean Walker on a partial break with about 6 minutes left in the first. Tarasenko, who had eight points in his previous five games, had two shots in 4:37 of ice time before leaving.

The 27-year-old has topped the 30-goal mark in each of the past five seasons with the Blues. He scored 33 goals and posted 68 points in 76 game last season, adding 11 goals and 17 points in 26 playoff games as the Blues won the Stanley Cup.

He has three goals and 10 points with a minus-2 rating in 10 games this season.