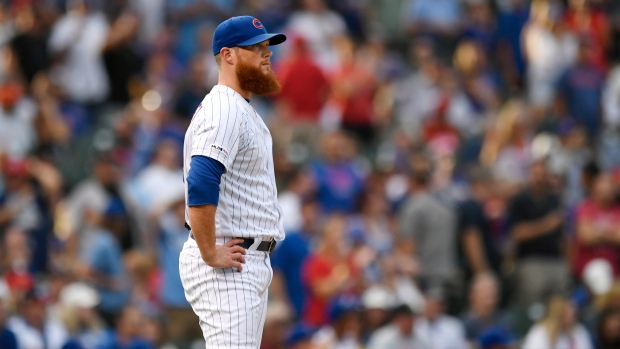 CHICAGO — Yadier Molina trotted around the bases while his teammates celebrated in the dugout. Paul DeJong lost his voice because he was screaming so much.

It was one wild party for the St. Louis Cardinals — again.

Molina and DeJong homered on Craig Kimbrel's first two pitches in the ninth inning, and the Cardinals handed the reeling Chicago Cubs their fifth straight loss with a 9-8 victory on Saturday.

"We don't give up," Molina said. "Today was a perfect example, we're never going to give up."

Chicago (82-73) used pinch-hit homers by Ian Happ and Tony Kemp and a solo drive by rookie Nico Hoerner to carry an 8-7 lead into the ninth. It looked as if it was on its way to stopping a costly slide that pushed it out of playoff position.

But Kimbrel (0-4) was hit hard again in his first appearance since he gave up Matt Carpenter's 10th-inning homer in the Cubs' 5-4 loss Thursday night. Then Milwaukee closed out a 10-1 victory over Pittsburgh to increase its advantage over Chicago for the second NL wild card to three games.

"It's really a difficult loss based on all the good things we did today," Cubs manager Joe Maddon said.

Molina jumped on Kimbrel's elevated fastball for his ninth homer , touching off a rollicking celebration on the Cardinals' side of the field. Kimbrel looked stunned as the ball soared into the bleachers in left-centre.

DeJong then belted an even deeper drive for his 28th homer, completing the Cardinals' seventh set of back-to-back shots this year.

"Yadi did a great job by hitting a tough pitch and I was ready for another fastball and I got it," he said.

Signed in early June, Kimbrel has allowed a career-high nine homers in only 20 2/3 innings this year, and blown three of 16 save chances. He permitted seven home runs last season in 62 1/3 innings with Boston.

"First and second pitch of the inning, felt like I made two competitive pitches that I wanted to, and they went out," he said. "It's just frustrating. I mean that's the only thing I can say."

John Gant (11-1) got the last out of the eighth for the win, and Carlos Martínez finished for his 23rd save. It's the first three-game win streak for St. Louis at Wrigley Field since June 20-22, 2016.

Kris Bryant led off the Chicago ninth with a walk before Martínez retired three in a row while pitching for the fourth consecutive day. Maddon sent Javier Báez up to hit for Kimbrel with two out, but the All-Star slugger struck out swinging on three pitches in his first plate appearance since he broke his left thumb.

"That's what this team does," Cardinals manager Mike Shildt said. "It cares and it fights."

Ozuna's two-run shot off Kyle Ryan gave St. Louis a 7-6 lead in the top half of the seventh, but Chicago rallied in the bottom half.

Pinch-hitting with Ben Zobrist on second after a one-out double, Kemp swung and missed at strike three, but Giovanny Gallegos was called for a balk. Given a second chance, Kemp hit a drive that drifted over the wall in centre on a breezy afternoon.

The crowd of 40,071 roared as Kemp circled the bases with his first homer since he was acquired in a July 31 trade with Houston.

Clocking in at 4 hours, 24 minutes, it was the longest nine-inning game in Cubs franchise history.

The Cubs paid tribute to longtime broadcast partner WGN-TV with a pregame video. One member of WGN's crew for Cubs games threw out a ceremonial first pitch, surrounded by some of his veteran colleagues.

The Cubs will show their games on their own regional sports network beginning next year, ending their run on WGN after 72 seasons.

Cardinals: 2B Kolten Wong (strained left hamstring) was out of the starting lineup for the second straight game. "The good news is he's feeling good, he's moving around," Shildt said. "We're just going to take it day by day. Encouraging, but no timetable at all." Wong got hurt during Thursday's 10-inning win over Chicago.

Yu Darvish (6-7, 4.02 ERA) pitches for Chicago in what might be the final game of the year at Wrigley. The Japanese right-hander has 34 strikeouts in 18 innings over three September starts. Miles Mikolas (9-14, 4.29 ERA) goes for his 10th win for St. Louis.