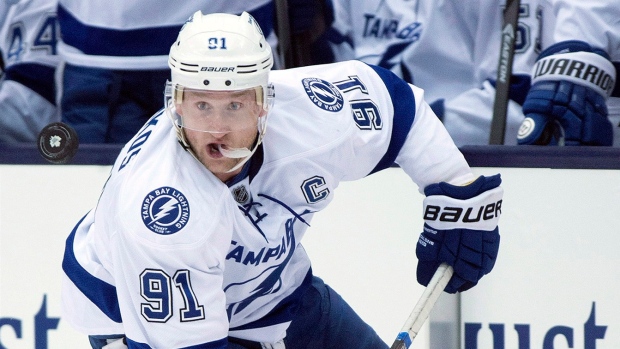 The future of Steven Stamkos has become a hot topic as he approaches unrestricted free agency in 2016.

And during the media session for the 2015 NHL All-Star Game on Friday, Tampa Bay Lightning forward gave one of his strongest indications to date that he's leaning towards staying with the team that drafted him in 2008.

"Yeah I think that's exactly what the plan is," Stamkos told reporters. "Obviously, July 1 you can announce a deal and something hopefully similar to what (Patrick) Kane and (Jonathan) Toews did, sometime after July 1. It's a long ways away. I'm not really focused on that. We haven't really talked about that at all.

"We'll discuss that in the summertime, but I'm obviously very happy with where I am in Tampa. You see the team we've been able to develop the past couple of years, the ownership we have, obviously Steve Yzerman, the coaching staff, the young nucleus of the team. I feel like the old fart at 24, all these guys coming in here, but they've played extremely well and I want to be part of it, to say I was there from the beginning to see the end result."

Speaking to TSN Hockey Insider Pierre LeBrun, Yzerman said the team is equally committed to getting a deal done.

"Our No. 1 priority after the season is to get Steven signed to an extension and hopefully have something to announce in and around July 1. That goes without saying, no question."

Stamkos, whose US$37.5-million, five-year contract expires after next season, will command a huge payday similar to the eight-year, $84 million deals signed by Toews and Kane with the Chicago Blackhawks last summer.

The 24-year-old native of Markham, Ontario has captured the Maurice Richard trophy twice for leading the league in goals, including a career-high 60 in 2011-12.

He's also appeared in 22 playoff games with the Lightning with 17 postseason points.