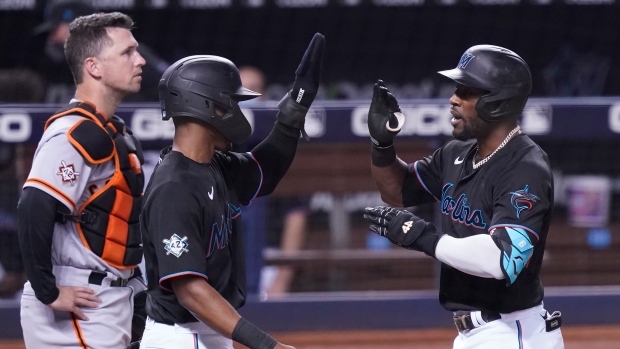 MIAMI — Starling Marte snapped an eighth-inning tie with a three-run homer and the Miami Marlins defeated the San Francisco Giants 4-1 on Friday night.

“My approach was to hit the ball up the middle because I had the runner in scoring position,” said Marte, who has reached base safely in 12 straight games. “I got a good pitch and everything went well.”

Anthony Bass (1-2) pitched a perfect eighth and Yimi García closed with a scoreless ninth for his third save. Marlins pitchers limited the Giants to five hits.

“Obviously, we played well on the trip,” manager Don Mattingly said. “You like to get this thing started in a good way and obviously tonight we did.”

“Our hitters are feeling some frustration now,” Giants manager Gabe Kapler said. “The lineup that we put out today I think we have a lot of confidence in long term.”

Chisholm’s leadoff homer in the fifth tied it. Chisholm drove Anthony DeSclafani’s slider over the wall in right for his third homer and fifth consecutive game with an extra-base hit.

DeSclafani allowed four hits and struck out four in six innings. He has yielded two runs in his three starts this season.

Castano was lifted for a pinch-hitter in the fifth. The left-hander permitted one run, three hits and two walks in his season debut. Although he left without striking out a batter, Castano induced 10 groundball outs.

“They’re a tough lineup, very competitive. Anything close, they weren’t really swinging at,” Castano said. “It was so great to get back out there. So excited to be back on the mound, get that rhythm going. I started to feel better as the game went on.”

Before his home run, Chisholm spotted a fan in the stands displaying a sign that highlighted the dyed blue hair the Marlins rookie has sported early in the season.

“I actually had looked at him the pitch before and saw his sign and the blue hair and I was like, check that out!" Chisholm said. “First time hitting a homer at (home), the stadium is erupting. It was one of the coolest moments I’ve had so far in baseball, having an at-home homer.”