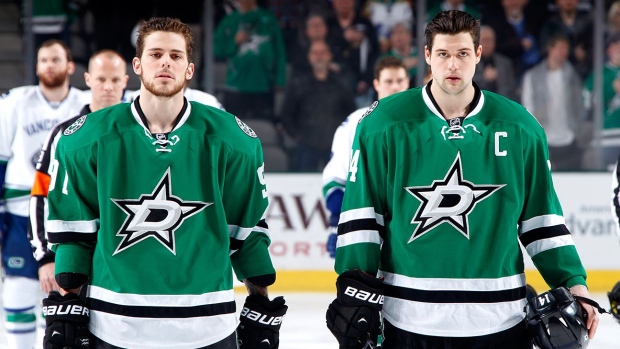 Dallas Stars CEO Jim Lites didn't mince words about struggling star players Jamie Benn and Tyler Seguin in the wake of the team's 2-0 win over the Nashville Predators on Thursday.

“They are f---ing horse-----, I don’t know how else to put it,” Lites told The Athletic's Sean Shapiro and Matthew DeFranks of The Dallas Morning News. “The team was ok. But (Tyler) Seguin and (Jamie) Benn were terrible.”

And Lites added that his sentiment is echoed by team owner Tom Gagliardi.

“He’s pissed,” Lites explained. “And you know what it’s about.”

Benn, 29, is in the second year of an eight-year, $76 million contract and earning $13 million this season (with a $9.5 million cap hit), making him the third-highest paid player in the NHL this season. He has 15 goals and 15 assists through 38 games this season. Seguin, 26, signed an eight-year, $78.8 million extension in the fall that goes into effect next season. He has 11 goals and 21 assists through the same 38 games.

Lites cites the pair's flagging fortunes as the reason why the Stars are mired in a wild-card fight and not challenging for the division title.

But we’ve had meeting after meeting after meeting. The accountability on the ice is not there. These guys were signed to big contracts because they were the third- and sixth-leading scorers in the National Hockey League over the past five years. They get their money, we expect them to not be outplayed every game we play in. And if they were as good as they’ve been in the past we wouldn’t be having this conversation.”

Lites, however, added that he doesn't regret the team handing out the pair's hefty deals.

Both players acknowledged their play needs to be at a higher level than it currently is.

“Not good enough,” Seguin said, according to The Athletic. “I’ve got to play better. I’m trying to do a job, and I haven’t had the right results.”

“I think it’s pretty self-explanatory; if this team wants to get to the next level that starts with myself,” Benn added. “And that’s exactly what needs to happen, we need to get better.”

And Lites hopes that happens before it's too late. "These guys have been great players, but we are 40 games into this season and they aren’t getting it done," he said. "We are going to sleepwalk to another 14th place from the bottom and miss the playoffs."

If Lites thinks there might be any blowback for his shockingly candid remarks, he's not afraid of it.

"I take a lesson from Bob Gainey here," Lites said. "He said you’d be really successful in this league if you never gave a shit about being invited to players’ daughters’ weddings, and that’s what I think. I don’t give a f---. I’m a year-to-year guy and I’ll be damned if a guy who has been as good to me as Tom Gaglardi - as good to this franchise - isn’t getting results, and those players aren’t getting it done. I’m telling you, we are gonna run through a GM who does everything he can to make the team better because we aren’t getting results."

The Stars (19-16-3) are next in action on Saturday night when they host the Detroit Red Wings.