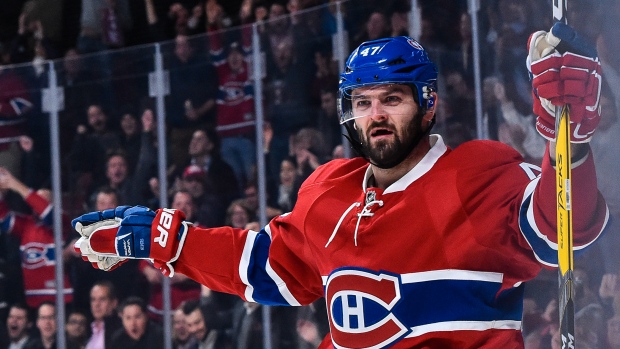 DALLAS — Right winger Alexander Radulov got the richest contract given to an unrestricted free agent this off-season when he signed a $31.25 million, five-year deal with the Dallas Stars.

Only after agreeing on terms with the Stars did Radulov get an offer from the Canadiens to stay in Montreal for that long.

"The money was basically the same level. For me it was more the term," Radulov said Monday. "Because I really (wanted), five years at least on my deal, and I want to play and not worry about it. Just play hard and try to win."

The Stars obtained the top player available on the market on Day 3 of free agency. Radulov will count $6.25 million against the salary cap through 2021-22.

"Alexander is a dynamic playmaker with top-end speed and skill," General manager Jim Nill said. "To add a forward of this stature to our lineup makes our top six as deep and talented as any group in this league."

The 30-year-old Russian had 18 goals and 36 assists for 54 points last season with the Montreal Canadiens after returning to the NHL following four seasons in the Kontinental Hockey League. He played on a $5.75 million, one-year deal and was looking for a long-term agreement this time around.

"When I put everything on the table and I saw what I have, it was an easy decision to go to Dallas," Radulov said. "With Montreal, I don't think we even get that close, you know. In my opinion."

Nill said he couldn't say what happened with Montreal's negotiations with Radulov, but added that his conversations with the player showed he was very committed to joining the Stars.

"We're excited about these moves, but we've got to go to work now. It doesn't guarantee anything," Nill said.

"We like what we have on paper, but in the end the goal for us is to be a contender every year, to get in the playoffs every year. We didn't do that last year for different reasons, injuries and everything else."

Before missing the playoffs this past season, the Stars had been the top seed in the Western Conference in 2015-16.

Radulov spoke by phone a few days ago with Stars captain Jamie Benn, who with Tyler Seguin make up one of the NHL's top scoring duos. Radulov said Dallas was an "easy choice" for him because of the players already there.

"(Benn) told me about the team, about the guys, about the city," Radulov said. "And I really liked it and I'm really thankful for the Dallas organization to give me a chance to play with a great player."