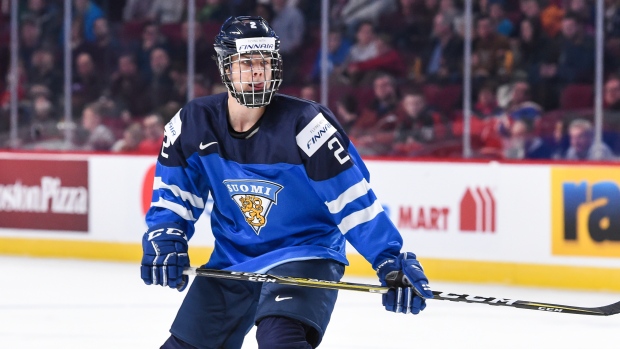 Heiskanen, who was taken third overall by the Stars in last year's draft, is the youngest player to ever win the award.

#DallasStars prospect Miro Heiskanen has won the Pekka Rautakallio Award which is given to the best defenceman in Liiga. Heiskanen is the youngest ever winner of the award. #GoStars

The 18-year-old just completed his second season in the Liiga with HIFK. He scored 11 goals and posted 23 points in 30 games, while also playing at the world juniors and the Olympics.

Heiskanen added three goals and nine points in 14 playoff games as HIFK finished third in the league. He had two assists in five games at the world juniors and one goal in five Olympic contests, though Finland failed to medal at both.

In February, TSN Director of Scouting Craig Button ranked Heiskanen as the eighth best NHL-affiliated prospect. Stars general manager Jim Nill told the Dallas Morning News he will look to bring prospects to the NHL faster than he has in the past, which likely will mean Heiskanen debuting next season.

"I've always talked about 'overripe' and I truly believed that, but you look around the league and teams are starting to go to their players at a much younger age, and those players are handling the pressure very well," Nill said. "So now we need to consider how we're using players and whether or not they might be ready earlier than we thought."

Heiskanen will represent Finland once again at the world hockey championship, which begins Friday in Denmark.