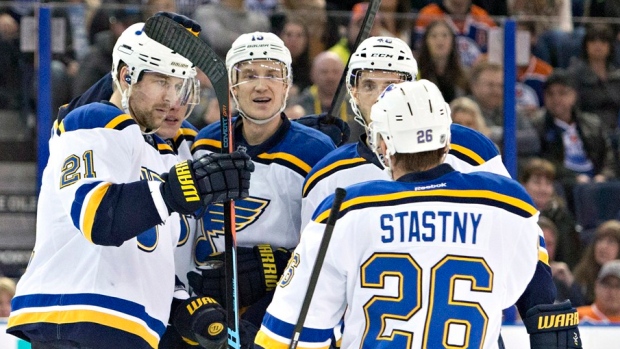 EDMONTON - It wasn't the easy ride the standings suggested it might be, but the St. Louis Blues at least got the result they were looking for on Saturday.

Paul Stastny scored the game winner and added an assist as the Blues came away with a 2-1 victory over the Edmonton Oilers.

"We made it a little harder on ourselves than it needed to be, but in this league, anyone can win on any night," said St. Louis goalie Brian Elliott. "It was an unbelievable goal by (Stastny) to kind of seal it and a couple of blocked shots at the end, guys were doing the things at the end to make us successful."

"From the 10-minute mark of the second period we really started to amp it up and started to play very well," said Blues head coach Ken Hitchcock. "I'm concerned about our slow starts.

Justin Schultz responded with the goal for the Oilers (18-35-10), who have lost three of their last four.

"I liked the way our guys played tonight," said Oilers interim head coach Todd Nelson. "I thought both teams played strong games. We gave ourselves a chance to win or get some points."

Edmonton forward Ryan Nugent-Hopkins agreed that his team is showing progress, even if not always getting the final result.

"That was the best we have played against them all year, but at the same time we have to find a way to get that extra goal," he said. "That's twice in the last few games that a team has scored late on us."

St. Louis got the game's first goal with eight minutes remaining in the first period as Stastny made a nice feed across to Jaskin, who beat Edmonton goalie Ben Scrivens for his 10th of the season.

Edmonton tied the game six-and-a-half minutes into the second period as Schultz beat Elliott with a long wrist shot.

The Blues were buzzing for the first half of the third period, but Scrivens made several huge stops— including a massive glove save on Stastny.

Stastny got even with just under six minutes left in the third as he cut in front and sent a backhand shot through Scrivens' legs to make it 2-1.

Edmonton was awarded a late power play and also pulled Scrivens for the extra attacker, but could not find the equalizer.

Elliott made 21 saves for the win as Scrivens stopped 25-of-27 shots in defeat.

The Blues play the third game of a five-game trip in Vancouver on Sunday. The Oilers are off until Tuesday, when they play host to the L.A. Kings.

Notes- St. Louis has owned the Oilers in recent years, coming into the contest with a 16-2-1 in their last 19 games against Edmonton… Oilers defenceman Jeff Petry was a healthy scratch, adding speculation he will be dealt before Monday's trade deadline… Blues defenceman Jay Bouwmeester played his 900th NHL game in his hometown… Out with injuries for the Oilers were Tyler Pitlick (lacerated spleen), Taylor Hall (foot), Nikita Nikitin (shoulder), Viktor Fasth (knee) and Anton Lander (shoulder). Edmonton also lost Iiro Pakarinen to a knee injury in the game. The Blues were healthier with just Kevin Shattenkirk (abdomen) out.