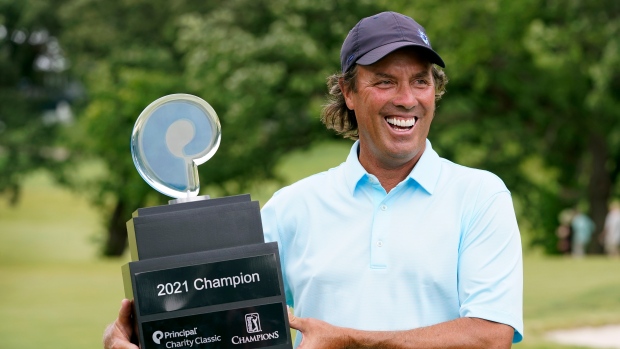 A final-round 67 pushed Stephen Ames into the winner’s circle at the Principal Charity Classic, giving him a one-shot victory over fellow Canadian Mike Weir at the Champions Tour event.

It’s believed this is the first time that two Canadian golfers have finished first and solo second on either the PGA Tour or PGA Tour Championship. In 1981 at the Quad Cities Open, Dave Barr won a playoff over four other golfers that included Dan Halldorson, who ended up tied for second.

Ames’ round equaled the low score of the day and allowed him to make up a seven-shot deficit over second-round leader Tim Herron, who stumbled in with a 76.

For a time, it looked as if the two Canadians might end up in a playoff but Weir made untimely bogeys at 14 and 16 to fall back. A final-hole birdie gave him the solo second finish.

“I guess at the beginning of the week I actually had a number in my mind that I was trying to achieve and that was 12 under,” said Ames. “I figured if I was able to shoot four under each day that I figured that 12 under would be a good enough number, but I wasn't sure that the weather was going to be like this. Obviously that 12 under I achieved and everybody else kind of faltered coming in, unfortunately for those, but fortunate for me.”

Ames, 57, becomes the first Canadian to win more than once on the 50-and-over circuit. His last victory was in 2017. In the intervening years, he has played inconsistently, often battling injuries. But this year he has showed signs of improved play, finishing inside the top 13 in three of his last five starts including a tie for second two weeks ago at the Mitsubishi Electric Classic.

“It's nice,” admitted Ames, who collected $277,500 US for his efforts. “[Last year] was I would say a no-show for the year with COVID and everything going on, plus I had injuries, so my year was very short. I think I only played 11 events. So I was quite happy just to get that year kind of done with and then kind of get things kick-started back.”

Always regarded as a great ball-striker, Ames led the field in hitting greens in regulation, landing on an eye-popping 87 per cent of the putting surfaces. He made just two bogeys in three rounds.

For Weir, it marked his fourth top-five finish in six starts this year. He notched his first Champions Tour victory at the Insperity Invitational last month.